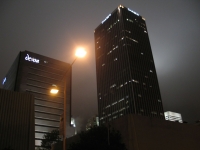 Major energy companies have effectively created a secret law firm of conservative attorneys general to persuade Washington lawmakers to gut environmental regulations, according to an investigation by the New York Times. In return, these senior government officials have received millions of dollars to help them win political campaigns.

Attorneys general are the top law enforcement officers for each of the 50 U.S. states, wielding considerable power to sue individuals and companies in the public interest. The Times has documented how at least 12 of these attorney generals - all from the Republican party - have switched sides to become cheerleaders for private industry. (43 of the 50 have to run for election while most of the others are appointed)

"Out of public view, corporate representatives and attorneys general are coordinating legal strategy and other efforts to fight federal regulations, according to a review of thousands of emails and court documents and dozens of interviews," writes Eric Lipton in the New York Times.

Attorney General Scott Pruitt of Oklahoma is singled out for his willingness to attack, lobby and even sue the federal governments on behalf of companies, a reversal of the traditional role of his office. Continental Resources, Devon Energy, and Oklahoma Gas & Electric are some of the companies from his state that Pruitt has worked with closely.

For example the Times uncovered a 2011 letter drafted by Devon Energy officials for Pruitt to send to the U.S. Environmental Protection Agency (EPA). "We have no pride of authorship, so whatever you do on this is fine," the company wrote in an accompanying note.

Pruitt cut and pasted the 1,016 word letter and edited just 37 words before signing it and sending it to Lisa Jackson, the head of the EPA. "It has come to my attention that the agency you oversee ... may be very significantly overestimating methane emissions from natural gas production," Pruitt's letter stated, in words that corresponded exactly to the Devon draft. "If true, this could have serious implications for the natural gas exploration and production industry nationwide."

Devon Energy has a vested interest in preventing new regulations on natural gas emissions. The company has drilled over 5,000 wells in an area called the Barnett Shale in north Texas in the last decade to extract natural gas using hydraulic fracturing. (This is a technique - often called fracking - by which chemicals and water are injected into rock formations deep underground with serious environmental consequences.)

Devon has also designed a technology to inject steam from saline water into sand formations 1,000 feet under the surface of the earth in Alberta, Canada, at its Jackfish project to extract bitumen, a heavy oil. The company is also backing the Keystone XL pipeline which will carry 830,000 barrels of crude extracted from tar sands in Alberta down south to the Gulf Coast where it will be refined into oil.

In 2012, Devon officials asked Pruitt to sign a letter to the U.S. Bureau of Land Management to opposed regulations on fracking, on federal land. Once again, Pruitt obliged, changing almost nothing from the draft that Devon drew up for him.

Pruitt has also joined Oklahoma Gas & Electric to sue the EPA to stop new rules that would require coal burning plants to install special equipment to reduce pollution. The lawsuit was thrown out of court in May.

The idea to get other attorneys general to team up with Pruitt appears to have coalesced at a conference at the Skirvin Hilton Hotel in Oklahoma city in January 2013 titled the Summit on Federalism and the Future of Fossil Fuels. It was organized by George Mason University in Virginia and had the backing of Andrew Miller, former Virginia attorney general, who dreamed up the idea of a conservative alliance to fight the Washington lawmakers. At least nine Republican attorneys general attended the conference where they hobnobbed with energy industry lobbyists.

"This strike force ought to take the form of a national state litigation team to challenge the E.P.A.'s overreach," Miller wrote to Pruitt in an email uncovered by the Times. "Like the Dalmatian at the proverbial firehouse, it could move out smartly when the alarm sounded."

"When the federal government oversteps its legal authority and takes actions that hurt our businesses and residents, it's entirely appropriate for us to partner with the adversely affected private entities in fighting back," Pam Bondi, the Florida attorney general, told the newspaper.

In return for lobbying on behalf of their behalf, companies have contributed generously to a new entity - the Rule of Law Defense Fund at the Republican Governors Association - which was set up earlier this year as a "public policy organization for issues relevant to the nation's Republican attorneys general and promotes the rule of law, federalism, and freedom in a civil society."

In reality, a major objective of the fund is to pay for election campaigns for their favored candidates. This year, the Republican attorneys general collected $16 million, four times as much as the Democrats - and for the first time ever, Republicans now control 27 out of 50 of the attorneys general offices in the country. (As recently as 1990, 38 of the 50 were Democrats)

Former attorney generals have expressed dismay at this new trend.

"(T)he office of attorney general ... is truly the lawyer for the people," Terry Goddard, former attorney general for Oregon, told the New York Times. "That independence is clearly at risk here. What is happening diminishes the reputation of individual attorneys general and the community as a group."

"When you use a public office, pretty shamelessly, to vouch for a private party with substantial financial interest without the disclosure of the true authorship, that is a dangerous practice," David B. Frohnmayer, former attorney general for Oregon, told the newspaper. "The puppeteer behind the stage is pulling strings, and you can't see. I don't like that. And when it is exposed, it makes you feel used."

Industry is, not surprisingly, delighted.

"Time and time again, General Pruitt has stood up and bravely fought for the rights of Oklahomans in those instances when the federal government has overextended its hand," Harold Hamm, the billionaire chief executive of Continental Resources, who chaired Pruitt's last election campaign. (Hamm's reference is inaccurate since attorney generals are not military generals, they cannot be called general)