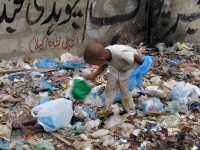 Stora Enso - a Swedish paper manufacturing giant - has been blacklisted after investigations into its supply chain in Pakistan showed that the company was knowingly using child labor. In March, AP7, a major Swedish pension fund, sold off its $4.1 million stake in Stora.

AP7 is a Swedish government owned pension fund that caters to over three million Swedes and is required to follow strict state-mandated policies to invest only in companies that abide by international treaties that Sweden has signed. The fund owns shares in some 2,600 companies and has the power to exclude a company for five years for failure to uphold environmental, human rights or labor law.

The fund investigated two mills - Kasu Mill in the northern agricultural region of Punjab and the Karachi mill, which is located in the center of Pakistan's largest metropolitan city. Both are operated by Bulleh Shah Packaging, a subsidiary of Packages Ltd. of Pakistan. Stora owns a 35 percent share in a joint venture with Packages Ltd.

In March Veckans Affarer, a Swedish business paper, published a report that revealed that Stora has been aware of the use of child labor in its waste paper supply chain in Pakistan since 2012 but done nothing about it.

The report detailed how subcontractors hire child laborers as scavengers to work the country's massive waste dumps in search for cheap recycled paper, which is then sold to a middleman or directly to Bulleh Shah for collection.

In Sahiwal, Punjab, for example, 30 children gathered waste paper for approximately 10 hours in hazardous conditions. Affarer confirmed - via a receipt from the children's employer - that the collected waste was ultimately sold to Bulleh Shah.

Stora officials confirmed the findings and attempted to explain why the company had done nothing about the matter. "Just walking away would cause nothing but even worse things to these children," Lauri Peltola, a senior executive at Stora Enso, told the Helsenki Times.

"If we pulled out, five-year-old girls would become prostitutes the next day... It is a major socio-cultural problem, and you can only eradicate it by removing the reasons for families to send their children to collect paper," Peltola added.

The use of child labor in Pakistan is by no means unique to Stora.  Some 2.5 million Pakistani children - aged mostly between 10 and 14 - quit school in order to support their poor families. An estimated 13 percent of workers in the country are child laborers, and just only 72 percent of children attend primary school.

The waste paper or wheat straw industry is a major employer of these children. Some 54 percent of paper supplies that reach vendors in Pakistan are provided by children, according to Child Labour in Wheat Straw and Recycled Paper Chains, a report submitted to Stora in 2012 by Socio-Economic Business Consultants of Islamabad-Pakistan (SEBCON).

On an average, these children earn an average of Rs. 100 to 300, the equivalent of less than $2 a day. "Scavengers, who are often young children, come from uneducated families," wrote SEBCON. "They have to deal with toxic chemicals, hospital waste, broken glass and sharp items capable of causing cuts."

SEBCON added that these children are exposed to extreme heat and are not equipped with any protective gear or even shoes.

In the past, Stora has also come under fire for its business practices in China and Uruguay where the company has been involved in land disputes. These conflicts led to Stora being kicked out of the Dow Jones Sustainability Index in 2013.

The company has also been criticized for labor practices in Tamil Nadu, India. A recent report by Finnwatch and Swedwatch highlighted health ailments among employees at Stora's paper packaging plant in Chennai from exposure to toxic chemicals and high working temperatures. The report also noted that plant workers, who are mostly landless rural farmers or from lower castes, say that they are not being paid a living wage.

Recently Stora has made an effort to counter the negative press around its global impact. In 2014, Stora partnered with the Danish Institute for Human Rights (DIHR) and released a joint report on all of its 93 manufacturing units around the world, including the Kasu and Karachi mills.

The report acknowledged the problematic issue of child labor in Pakistan and recommends a human rights sustainability action plan that Stora says it will start this year. Stora also claims to have performed audits on lower level supply chains (ie subcontractors to its businesses) in 2014.

Karl-Henrick Sundstrom, Stora Enso CEO, told the Financial Times that the company  agrees that it is completely "unacceptable" to have any form of child labor in its supply chain. "There are millions of kids working in Pakistan. We can show that we can do things differently." He described that AP7 decision as very unfortunate.

But activists at Swedwatch say that they are skeptical of Stora's sudden commitment to social responsibility. They point out that it has been three years since the company's launched a new motto - "doing good for the people and planet" - yet little has changed on the ground.