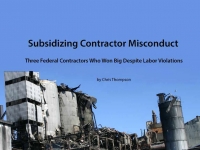 Rodney Bridgett was killed when a piece of Tyson Foods' heavy equipment crushed him. Calvin Bryant was crippled in a Imperial Sugar plant explosion in Georgia that also killed 14 of his co-workers. When Alma Aranda tried to exercise her legal right to take unpaid time off to care for her dying mother, Verizon harassed her with so much paperwork that her hair fell out in clumps.

What do these three cases have in common? The federal government handed out tens of millions of dollars in contracts to these companies, without regard to how they treated their workers.

Here's why the executive order could help workers: Every year, the federal government awards a fortune in contracts for everything from defense systems to administrative services to companies that employ an estimated one in five American workers.

Government rules that require it to contract only with companies that have a "satisfactory record of performance, integrity, and business ethics." In practice, the contracting system does not effectively review companies' records for responsibility, nor does it ensure-before awarding contracts-that violators reform their practices.

As a result companies have continued to receive billions of dollars, despite long records of violating workplace laws. They may neglect legally required safety standards and maim a worker on the job, systematically engage in age or gender discrimination, refuse to pay overtime in violation of the law, or ignore the Americans with Disabilities Act and demote or fire disabled employees.

When these companies are caught, they may face financial penalties. Sometimes they are in the form of a fine from the Occupational Safety and Health Administration (OSHA), rarely in excess of a few hundred thousand dollars. Sometimes the payoff is a little steeper, such as when employees or state agencies file class action lawsuits and collect millions.

But the federal government did little to ensure that these companies clean up their acts before they collected tens of millions in contracts. A 2013 report from Sen. Tom Harkin (D-Iowa) found that the government awarded companies with the most egregious records of violating workplace wage and safety records $81 billion in 2012 alone.

In effect, the federal government has been subsidizing contractor misconduct with our tax dollars. As long as federal contractors have known that their lawbreaking would not jeopardize the next contract, they have had little financial incentive to stop mistreating their workers.

By signing the Fair Pay and Safe Workplaces Executive Order, President Obama signaled that it's time for this to stop. The order will ensure that federal contractors obey workplace laws before receiving government contracts.

Once implemented, the order:

* Will require federal contractors to disclose their record of compliance with workplace laws;
* Will ensure that law-breaking companies clean up their acts by empowering federal agencies to consult with the U.S. Department of Labor to investigate and remediate ongoing problems with contractors.

This report helps to put a face to the millions of workers the order is designed to protect. Through press accounts and personal interviews, CorpWatch documents the stories of Rodney Bridgett, Calvin Bryant, and Alma Aranda, explaining how their employers ignored basic workplace safety rules or undermined an employee's legal right to unpaid leave in the case of a medical emergency, yet still managed to secure tens of millions of dollars in federal money.

For far too long, federal contractors have been able to cheat or injure their employees, secure in the knowledge that their lawbreaking will not count against them when their contracts come up for renewal. Once implemented, the Fair Pay and Safe Workplaces Executive Order will take that security away from them.