Spies in Africa's Skies: New Contractors for the Pentagon 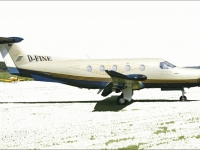 In 1994, a Turkish couple named Fatih and Emren Ozmen, bought up a nondescript company named Sierra Nevada Corporation in the small town of Sparks, just outside of Reno, Nevada.

Just over a decade later, on the other side of the country, in Eatontown, New Jersey, Scott Crockett and David Lewis, two African-American communications officers who were deployed with the U.S. Army in Afghanistan and Iraq, started up a company called R-4, Inc.

Today these two companies are now at the forefront of the covert war in Africa, where they operate small Swiss aircraft to spy on behalf of the U.S. Special Operations Command. They help support secret missions all over the continent, working most closely with AfriCom, the U.S. command for Africa, run out of Stuttgart, Germany.

The Ozmens have grown from a 20 person operation in 1994 to a 2,100 employee outfit today. Their pilots fly Pilatus PC-12s, small Swiss turboprop planes which are "(e)quipped with hidden sensors that can record full-motion video, track infrared heat patterns, and vacuum up radio and cellphone signals, the planes refuel on isolated airstrips favored by African bush pilots, extending their effective flight range by thousands of miles," according to the Washington Post.

The newspaper says that contractors have been hired to fly as much as 150 hours a month. Also outsourced to the private sector were sensor operators, intelligence analysts, mechanics and linguists. (One of the companies that supplied linguists to the Pentagon in Africa was Mission Essential Personnel)

The road to growth for the Ozmens might have something to do with the fact that they are close friends with Jim Gibbons, the former governor of Nevada, and his wife Dawn Gibbons, whom they took on a holiday in Turkey in 2000. Gibbons was a member of the U.S. Congress at the time and the Las Vegas Review Journal notes that in mid-2004 "he helped Sierra Nevada get a $2 million no-bid federal contract for helicopter landing technology. Throughout that year, the company was paying Dawn Gibbons $2,500 a month as a public relations consultant." That year the Ozmens company won $42 million in Pentagon contracts.

In 2007, when Gibbons became governor, the federal government investigated how the Ozmens won their classified Pentagon contracts. Dawn Gibbons was unapologetic. "Sierra Nevada got a bargain for the work I did. ... Believe me, they got their money's worth," she told the Associated Press.

What was their company selling at the time? A system called Force 4 which "offers real-time video, individual emergency response tracking, two-way voice and message traffic with command center interaction for terrorism preparedness and response."

Today Sierra Nevada is one of the key contractors in the drone war around the world. They sell Tactilink, a voice and data relay system for drones, they support Gorgon Stare, a multi-camera video suite touted for its ability to spy on whole cities at once and they make landing gear for the Predator drones that the Central Intelligence Agency uses in Pakistan and Yemen to kill "terrorists" from the sky.

The Pentagon and the CIA have long used private contractors for covert wars. Air America and Air Asia were the front companies used to bomb Cambodia and Laos for president Lyndon Johnson. Bigger, more established companies, like Northrop Grumman were used to spy in Colombia under president Bill Clinton

So it seems only appropriate that the next major Democratic president, Barack Obama, would adopt the same strategy of clandestine private contractors like Sierra Nevada and R4 for covert wars, this time in Africa.