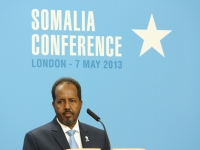 British regulators are investigating Soma Oil & Gas, a UK-based company, for allegedly paying bribes to the Somali government in exchange for exploration rights. Under scrutiny is the payment of $580,000 for "capacity building arrangements" at the Ministry of Petroleum in Mogadishu, according to Financial Times sources.

In August 2013, Soma was awarded the right to explore for oil off the coast of Somalia. The company was given the rights to 12 "blocks" that covered 60,000 square kilometers and the option to pick other areas if it wanted.

The deal came under fire immediately for several reasons. First, Somalia did not hold open and competitive bidding for the exploration rights and second, Soma Oil & Gas had no prior experience at all - the company was set up just months before it won the contract. Not least was a warning from the United Nations Monitoring Group that any oil deal could destabilize the first government to emerge after 20 years of civil war.

"A major contract signed during a time of instability with a company without much track record or enough funds at the time of signing raises all sorts of alarm bells," Barnaby Pace, a campaigner at Global Witness said in a press statement. "The government of Somalia needs to open up about how it awards contracts intended to help rebuild the economy, and extractive deals need to be conducted openly so that their citizens all over the world are involved in such critical decisions."

But at the time the Somali government claimed that the oil deal was a sign of confidence in the country. "This investment is going to be very good for the country and we're hoping that other investors come too," Abdirizak Omar Mohamed, Somalia's natural resources minister, told the Financial Times. "These are people . . . who have expertise in the area of oil and gas, and people who are well respected in the UK."

Soma Oil & Gas certainly has friends in high places. The chairman of Soma is Lord Michael Howard, the former chairman of the UK Conservative party, who personally went to Mogadishu to signed the oil deal in 2013. Others included Lord Clanwilliam and Basil Shiblaq, a major donor to the party. The company has also received financial backing from billionaire Alexander Djaparidze, who founded Russia's biggest drilling company.

The Wall Street Journal says that Howard has been able to obtain special permits from the U.K. business minister for Soma security guards to carry weapons despite a United Nations arms embargo.

On August 1, the company confirmed that it was the subject of a criminal investigation by the UK Serious Fraud Office. "Soma Oil & Gas is confident that there is no basis to the allegation," the company said in a press statement. "Soma Oil & Gas has always conducted its activities in a completely lawful and ethical manner and expects this matter to be resolved in the near future."

"I don't know how the investigation came about or what kind of corruption we are talking about," Mohamed, Somalia's security minister, insisted to Reuters. "It was a fair deal for Somalia."

Others disagree. Bloomberg reporters say that they have seen a draft production-sharing agreement that limits the government's share of the income from the first 25,000 barrels per day to 10 percent. Only after the production rises above 150,000 barrels a day will the Somali government get 30 percent of the revenue.

Such an arrangement is very unusual, according to experts on similar deals in Africa. "None of them defer significant revenue streams to the government for as long as Soma," says Johnny West, founder of Berlin-based OpenOil, told Bloomberg. "The next lowest cap on upside to the government of a mega-find is effectively 60 percent of profit, half as much again as in the Soma deal." (The deal has not been finalized yet)

Meanwhile Mohamad Ali Ajami, another Soma director, is also being investigated by the U.S authorities for allegedly taking a bribe when he arranged for the Libyan Investment Authority to put $300 million into the Och-Ziff Capital Management Group hedge fund.