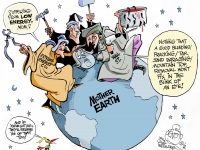 A deadly explosion in Jiaoshizhen, Sichuan province, has raised concerns about the risks involved in hydraulic fracking in China. The explosion occurred at a facility operated by Sinopec - one of China's biggest oil and gas companies - that is being advised by Breitling Energy, a Dallas-based company.

China, which recently became the world's largest producer of greenhouse gases, is trying to diversify into natural gas production as a new source of energy, especially as much of its energy is produced from burning low-grade coal, which has also exacerbated urban pollution.

The latest technology that China is experimenting with to extract natural gas is horizontal fracking - the process of drilling and injecting water and chemicals into the ground at high pressure in order to shatter underground rock formations to help release trapped oil and gas. First invented in the U.S., horizontal fracking has sparked a boom in energy production, helping boost U.S. output by over 50 percent in the last five years to 7.4 million barrels a day.

Fracking may come at a difficult price for China as its unique geology of twisted and folded faults makes underground drilling two to three times deeper than required in the U.S.  "There is no guarantee that the technology will be suitable for China," Tao Wang, scholar at Beijing's Carnegie-Tsinghua Center for Global Policy, told Public Radio International.

China's State Council - the chief administrative authority in the country - issued a call in October 2013 for industry to produce 6.5 billion cubic meters of natural gas from underground shale formations by 2015. The Jiaoshizhen facility, which is situated in a small remote mountain valley in western China, is one of the first such projects.

A New York Times account of the Jiaoshizhen incident described villagers being awoken by a large explosion boom last April to witness a "tower of flames" approximately 100 feet high at one of the oilrigs.

Eight Sinopec employees were allegedly killed in the explosion, according to interviews conducted by the Times in August 2013 and February of this year. Villagers told the newspaper that the explosion had created an all-encompassing foul smell around the village and that diesel run-off from drilling sites were polluting local streams.  The drilling "makes so much noise and the water that comes down the mountain has become so much dirtier to drink; now it smells of diesel," Tian Shiao Yung, a local farmer, said.

Li Chunguang, president of Sinopec, denied the incident in an interview with the New York Times last month. "There is no basis for this," he said.

Sinopec is being advised on fracking by Breitling Energy, a Texas company, that has been aggressively promoting the technology around the world. "They (China) want to have other avenues of natural gas and oil coming into the country, as they know their economy hinges on it," Chris Faulkner, CEO of Breitling told World Finance magazine. "China wants energy security and I think that that is what we need to think about when countries are looking at shale gas development," said Faulkner in an interview with World Finance.

After news of the Jiaoshizhen incident broke, Faulkner now claims that China is unwilling to discuss the long-term environmental and health impacts of fracking with him.

However, just four months ago, Faulkner dismissed any environmental or health concerns connected to fracking in a commentary piece he wrote for the Guardian newspaper in December.

"The opposition to fracking is a product of scientific misunderstanding - or worse, an agenda put forward by supposed environmental advocates who stand to profit if natural gas never lives up to its full potential," wrote Faulkner.

Activists, on the other hand, says that fracking poses grave risks to the environment particularly to ground water which can be contaminated by the toxic liquids pumped into the ground. "The rapid expansion of shale gas development and fracking in the US has resulted in significant environmental and public health problems, and become an ongoing public health and environmental experiment," writes Food and Water Watch in "Fracking: A New Global Water Crisis Report." "Many of these problems are inherent to the practice and cannot be avoided through regulation."

Indeed some Chinese government reports have drawn attention to the risks of drilling for shale in a country where 40 percent of the rivers are highly contaminated and 300 million people lack access to safe drinking water. "Most of the nation's shale gas lies in areas plagued by water shortages," the 2013 Report on China's economic energy states.

Even though Sinopec denied the Jiaoshizhen explosion took place, it has acknowledged the dangers of excessive water use. "Drillers need ten times more water to extract natural gas from underground shale formations," said Bao Shunjing, deputy director of Sinopec, "than to pump equivalent amount of oil and gas from conventional wells."