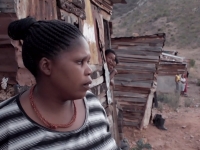 "Bitter Grapes-Slavery in the Vineyards," a new Danish television documentary, alleges that many South African wineries pay their workers less than the legal minimum wage; discourages them from unionizing; and exposes them to toxic pesticides. The documentary singles out Robertson's Winery in the Western Cape region.

The film, which was made by journalist Tom Heinemann, claims that workers are often paid R105 ($7.76) for a 12-hour shift and that living conditions for workers are abysmal. "I saw very very depressing things. I saw housing that was literally falling apart, rain coming down the roofs," Heinemann told 702, a Danish radio station. "I saw people have to live off water from a drain ditch alongside a road. I saw toilets that were locked up, so they had to walk into the vineyards to do their toilet."

"People say apartheid is gone. But if you go into our rural areas, apartheid is still very much alive," one interviewee told Heinemann in the documentary.

Nor do the workers have anybody to advocate for them. "The [vineyard owners] don't like unions," Deneco Dube, paralegal adviser to the Commercial Stevedoring Agricultural and Allied Workers' Union (CSAAWU), told Heinemann. "They will find the leader of the union, or someone speaking out on behalf of the workers. Lawful or not, he will dismiss them. He believes that when you cut the leadership's head, the whole body is nothing any more."

South Africa has produced wine since 1655 when Jan van Riebeeck of the Netherlands colonized the land of the Khoikhoi people in the Western Cape region on behalf of the Dutch East India Company. The vineyards were set up to supply ships sailing from Europe to Asia. As the Dutch expanded their presence, they brought slaves to work on their farms and vineyards.

Since the days of colonization, the vineyard workers have never been well treated. A survey of their conditions as recently as 1996 estimated that less than 50 percent of workers had electricity, 34 percent had no running water and 27 percent did not have any toilets.

Indeed, for most of the time that grapes have been cultivated in the Cape, workers were partly paid with wine instead of money, a practice that was outlawed in 1961, but Heinemann says continues informally to this day.

In 2011, Human Rights Watch published a report titled 'Ripe with Abuse: Human Rights Conditions in South Africa's Fruit and Wine Industries,' based on 260 interviews.  "The wealth and well-being these workers produce shouldn't be rooted in human misery," Daniel Bekele, Africa director at Human Rights Watch, said in a press releae at the time. "The government, and the industries and farmers themselves, need to do a lot more to protect people who live and work on farms."

But five years later, apparently, not much has changed.

Heinemann singles out Robertson's Winery, which is located on the Breede river in the Langeberg mountains. Some 220 Robertson's vineyard workers have been on strike since August, demanding a minimum monthly wage of R8,500 ($628). The vineyard has countered with an offer that is a little less than half that amount - R4,000 a month ($295.50)

The winery has responded by saying that the documentary was biased because it relied heavily on CSAAWU which is backing the worker's strike.

"Robertson Winery views the documentary 'Bitter Grapes' as a one sided and somewhat superficial depiction of the circumstances of the South African wine sector," Anton Cilliers, CEO of Roberston wrote in a comment on the company website. "The documentary chose to pursue the false narrative that Robertson Winery is party to payment of 'slave wages and apartheid practices.' So too, the fact that employees of Robertson Winery have access to free medical facilities as well as access to housing subsidies/loans and opportunities to further their education, was simply overlooked and ignored in the documentary."

The winery has also enlisted support from the industry. "I would very much like to emphasise that Robertson Winery is not tantamount to slavery," Martin Horwitz, the head of corporate social responsibility at PrimeWine, the company that imports Robertson wines in Sweden. "Salaries are relative and reviewed annually by SA8000-certified accountants. Additionally, salaries are reviewed alongside experience, job description, gender and ethnicity."

Despite these statements, since Heinemann's film aired in October, a number of Danish supermarkets have either taken Robertson wines off their shelves or canceled future import orders, such as Dagrofa, Kiwi, Meny and Spar.