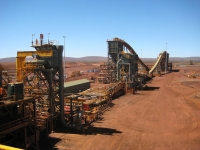 The Juukan Gorge, a 46,000 year-old sacred Aboriginal site in the Pilbara region of Western Australia was blown up by Rio Tinto, the world’s second largest mining company, in a quest for iron ore, despite the fact that company executives were aware of the site’s significance to local indigenous communities.

Rio Tinto, which is headquartered in London and Melbourne, has operations all over the world from Serbia to Mongolia. With a revenue of $43.165 billion in 2019, Rio Tinto has built its business on the mining of precious metals such as diamonds, uranium, zinc, and most commonly, iron ore.

The company has also long been criticized by environmentalists for their unsustainable mining operations – indeed, in the 1990s, activists from around the world used to issue a regular newsletter about the company titled People Against Rio Tinto Zinc and Subsidiaries (Partizans).

"Rio Tinto came like a thief in the night and blasted a 50,000-year-old site where human occupation was determined to exist for over 46,000 years, surpassing the last ice age,” Robert Eggington, CEO of Dumbartung Aboriginal Corporation that supports the local Nyoongah indigenous community, told protestors at a rally in Perth earlier this month. "What a massive devastation to the Earth, to human history and all of mankind."

Juukan Gorge has been deemed a sacred site due to its association with social and cultural customs of the Australian Aboriginal peoples. Aboriginals have a collective belief known as The Dreaming about where Ancestral Spirits first formed life on land. These sacred sites serve as physical locations for Aboriginal spiritual connectedness and they believe that such sites protect the overall health of the land and community.

Through excavations, archaeologists have discovered over 7,000 objects sacred to the Puutu Kunti Kurrama and Pinikura (PKKP) peoples in the caves of the Juukan Gorge, that show evidence of human occupation pre-dating the Ice Age. Indigenous activists note that Rio Tinto knew about the unique archaeology makeup of the land for several years, given that the company provided funding in 2015 to PKKP community members to make a documentary highlighting the cultural richness of the region.

At about the same time Rio Tinto applied for and was granted permission by the Western Australia Registrar of Aboriginal Sites to conduct blasting in Juukan Gorge to expand the Brockman 4 iron ore mine under Section 18 of the Aboriginal Heritage Act which exempts them from prosecution for "excavating, destroying, damaging, concealing or in any way altering any Aboriginal site." (This is despite the fact that the Aboriginal Heritage Act was created “for the preservation of places and objects customarily used by, or traditional to, the original inhabitants of Australia or their descendants,” according to the Western Australia government website.)

“The blasting activity in Juukan Gorge by Rio Tinto exposes a broken relationship with the Puutu Kunti Kurama and Pinikura Peoples and a breathtaking breach of a respectful relationship,” Reconciliation Australia, an NGO focusing on bridging the relationship between Indigenous and non-Indigenous people, said in a public statement in response to Rio Tinto’s decision to blast the cultural site.

Rio Tinto is not the only company that has been awarded permission by the Australian government to destroy Indigenous sites in the region. For instance, three days after the Juukan Gorge explosion, Ben Wyatt, the Western Australian minister for Aboriginal affairs, granted BHP, another major mining company, permission to blow up over 40 aboriginal sites for metal extraction.

Following a massive public outcry over the Juukan site blasting, both BHP and Rio Tinto have backtracked. BHP has agreed not to destroy the sites that they have received approval for, while Rio Tinto has issued a formal apology in a public statement. “We have made it clear to the PKKP that we are very sorry – it was never our intent to cause distress,” Chris Salisbury, the CEO of the company said. “Rio Tinto employees are hurting and I am personally distressed.”