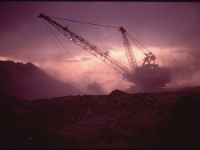 WWF Europe has filed a complaint for false advertising against Peabody Energy, the world's largest coal mining company, after the company began a campaign to promote the use of coal in developing countries, claiming that so-called "clean coal" technology could eradicate poverty.

In late February, Peabody paid for an advertisement in the European edition of the Financial Times with pictures of poor people cooking and warming themselves around the world and a headline that read: "Let's brighten the many faces of global energy poverty."

The company said that it was "working to build awareness and support to end energy poverty, increase access to low-cost electricity and improve emissions using today's advanced clean coal technologies."

WWF's complaint alleges that Peabody's ad is in violation of the Jury d'Ethique Publicitaire code which require that require that "any publicity must be decent, honest and verifiable." "Peabody is marketing its dangerous technologies onto those poorest countries with the least development options," says Tony Long, the director of WWF European Policy Office. "Peabody Energy's new campaign marks the final death throes of a dying and desperate industry."

The term "clean coal" was coined by U.S. Congress in the mid-1980s to rehabilitate the image of coal as a dirty industry by providing funding to address the impact of burning coal which causes air pollution and the emission of greenhouse gases that cause climate change. The term, however, does not address the long term environmental and social issues
caused by coal mining which have resulted in the destruction of
agricultural and natural lands as well as water pollution.

Peabody touts the process of carbon capture and storage (CCS) in order to prevent the release of carbon dioxide into the atmosphere. This is done through three key steps: carbon dioxide created by burning coal is compressed, transported typically by pipeline, and then stored on land or under the seabed.

These CCS technologies, however, are often more expensive to install, almost doubling conventional plant costs, according to the U.S. Department of Energy. This, in turn, may result in electricity price hikes of up to 91 percent. Another major concern with CCS technologies is the possibility of leakage of the stored carbon dioxide. Indeed, according to "False Hope" - a 2008 Greenpeace report - even if one percent of the compressed carbon dioxide escaped, it would actually negate the purpose of capturing it in the first place.

Some of the impacts of open cut mining enumerated by Greenpeace include: the destruction of landscapes, deforestation, chemical contamination of ground water, pollution of waterways and compromises the health of individuals who live near the sites.

Another key issue that is the fate of coal ash, a by-product of burning coal that contains a concoction of some of the world's deadliest toxins, including arsenic, boron, chromium, lead, mercury and selenium. CCS technology converts this into a slurry that are stored in open air lagoons which have occasionally leaked and contaminated ground water.

Peabody itself has been criticized heavily for decades over its coal mining practices notably in Arizona, where the company signed a contract with the DinÃ© and Hopi tribes in 1964 allowing the company mineral rights and use of an aquifer that carried out for decades.

Two of these mines - Black Mesa and Kayenta - have fueled major discontent among dozens of families in the area who ironically live without power or running power while thousands of others have been forced to move off the land. The tribes also allege that Peabody's usage of the water has caused a significant decline in available potable water. Local coal mining workers have also developed severe health problems as a result of the mining, including asthma, black lung, and bronchitis. (Black Mesa was shut down in 2005 while Kayenta Mine remains in operation.)

To this day, Peabody is attempting to expand its coal mining in the U.S. In southern Illinois Peabody has won a concession from local officials to commence new operations in a community named Rocky Branch, despite documented evidence of flooding, blasting and emergency access problems, and even a failure to obtain federal environmental permits.

For these reasons Peabody has long been a target of activist students in its home state of Missouri where it has endowed a research entity called the 'Consortium for Clean Coal Utilization' at Washington University. A campaign called Students Against Peabody has demanded that Peabody CEO Boyce be removed from the Washington University's Board of Trustees and that the University change the name of the research entity to take out the reference to clean coal.

"Peabody ingratiates itself to the local community by posing as a benefactor to the arts, charitable corporate 'citizen,' and hero tackling "energy poverty," said Caroline Burney, a senior at Washington University. "It all sounds pretty good until you realize that Peabody Energy is the world's largest private sector coal corporation whose business model propagate climate change and destroys communities."

Actions that Students Against Peabody have taken include dropping banners at coal-related events and peacefully disrupting speeches.

The latest effort has been sit-ins against Peabody that are now in their third week. Last week 400 people rallied at Brookings Hall with signs that read, "How much is our integrity worth?" and "Peabody's green can't make coal clean."

Peabody is not the only fossil fuel company to attempt to rebrand its business practices as environmentally friendly. BP attempted to re-name itself 'Beyond Petroleum' to paint the company in a better light in 2000. Unfortunately for the company, this campaign backfired when in 2010, an offshore oil rig exploded, spilling tens of thousands of barrels of crude oil into the Gulf of Mexico, the worst oil spill in U.S. history.