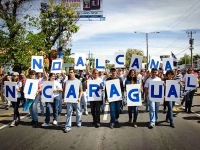 A $50 billion plan by a Hong Kong based developer to cut a canal through Nicaragua to allow ocean going cargo ships cross back and forth from the Atlantic to the Pacific ocean has suffered major setbacks after fierce opposition by environmentalists and local communities.

The Nicaragua Grand Canal project was approved by the government of Daniel Ortega in June 2013 and is being financed by Wang Jing, the billionaire CEO of Beijing Xinwei, a Chinese telecommunication company. Wang has reportedly invested $500 million of his own fortune into the project, which he hopes will rival the century old Panama Canal.

"The brave Chinese sages explored and established the Silk Road, which helped to promote the progress of human civilization and benefit the prosperity of many countries and nations," Wang said at the project inauguration on last December. "The ancestral mark remains in the blood and the heart of Chinese companies. Making great contribution to the world in the new era by our Chinese people in building a new maritime Silk Road of the 21st century has been our huge engine and source of courage and confidence to develop the Grand Canal of Nicaragua."

Since then the project has hit two major obstacles. The first was the crash of the Chinese stockmarket this summer that reduced Wang Jing's personal fortune from $10.2 billion to $1.1 billion. The second was a critical report from Environmental Resources Management (ERM), a UK company hired by HKND to review the project.

The ERM evaluation, which was released last week, concluded that the canal project is "fraught with risks and uncertainties" and estimated that some 30,000 people might be displaced.

Concerns about the impact of the canal have already galvanized Nicaraguan civil society. MÃ³nica LÃ³pez Baltodano, the executive director of FundaciÃ³n Popol Na, a Nicaraguan NGO, flew to Washington DC this past March to testify before the Inter-American Commission on Human Rights that as many as 120,000 people could be uprooted by the project.

Baltodano says the biggest threat will be to Lake Nicaragua (which is known locally as Lago Cocibolca or 'sweet waters lake') from massive dredging to allow ocean going cargo ships to pass through, as well the system of locks that will allow salt water into the 8,300 square kilometer lake that 200,000 people depend upon.

Environmentalists also say that the project may displace the Rama-Kriol indigenous community. "If the project is implemented, the strong possibility exists that the Rama language in the community of Bangkukuk Taik will be extinguished as its last speakers are forcibly displaced," Becky McCray, an lawyer for the Rama-Kriol, told the Inter-American Commission. "The community continues to demand its rights, claiming the title to its collective land, which the Nicaragua government intends to usurp for the canal's route."

Meanwhile farmers in the path of the canal have already begun to protest. "We are not going to allow them to kick us out of our property. We are ready to die before we give our property to the Chinese," Orlando Ocampo, a farmer leader, told the Associated Press.

Activists say that the Nicaraguan government has responded with violence and intimidation. Octavio Ortega, president of the Fundemur NGO, says he was beaten and thrown into jail when he organized a blockade of the Pan American Highway just before the canal inauguration last year. "My cellmates had to lift me up and help me so I could relieve myself," Ortega told the Guardian newspaper. "The first night I couldn't sleep because I couldn't lie down. I spent the first four days in a bad way."

The government has also compounded anger around the project by refusing to release much information about the project, including precise details about the canal route.

HKND recently decided to postpone construction work till next year. The company says it firmly believes that it can still raise the money needed. "I have no doubt that appropriate financial arrangements will be in place before construction commences," Bill Wild, HKND's chief project adviser for the canal, told the Guardian.

Company officials also say that the protestors are wrong. "We believe that the canal project will eventually produce a net positive environmental benefit," HKND's vice-president, Peng Guowei told Xinhua. He said that the company planned to stay away from areas of high ecological value, invest in reforestation to reduce soil erosion and provide local jobs.