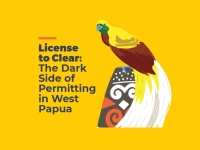 West Papua, the eastern most province of Indonesia, shares the rainforest of New Guinea with the country of Papua New Guinea. It is the third largest rainforest in the world (after the Amazon and the Congo) and hosts one in 20 of the world's animal and plant species as well as over 800 language groups. (Most of the biodiversity and languages are in Papua New Guinea which is over three times the size of West Papua.)

Few roads exist on the island which has helped save these forests from the logging industry - natural forests still cover some 80 percent of the land mass. But those days may soon coming to an end - notably as a result of the efforts of the palm oil industry which has been quietly signing lucrative land deals in the capital city of Jakarta some 3,000 kilometers away.

In the last two decades, companies have been issued permits for 37 concessions that cover almost one million hectares, according to Greenpeace's research. Over 60 percent of the land was permitted by Zulkifli Hasan, the Minister for Forestry between 2009 and 2014. To date, almost 140,000 hectares have been cleared.

“Our investigation found strong relations and overlapping interests between Indonesian political elites and plantation companies in Papua Province," Kiki Taufik, head of the Indonesia forests campaign at Greenpeace Southeast Asia saidin a press statement. "Former cabinet ministers, members of the House of Representatives, influential members of political parties and retired high-ranking military and police officers have all been identified as shareholders or board members of plantation companies featured in the report’s case studies.”

The Greenpeace report identifies 12 companies that have cleared forests over the last decade:

Six of the 12 are Indonesian companies including four controled by some of the wealthiest men in the country namely: Anthoni Salim, Martua Sitorus, Peter Sondakh and Sukanto Tanoto. And just two companies account for almost half of the forests cleared: Korindo and Posco, both of which are headquartered in South Korea.

Korindo, for example, has come under fire for the way it has created its plantations on West Papua. An investigation by Al Jazeera, The Gecko Project, the Korean Center for Investigative Journalism-Newstapa and Mongabay and found evidence that large 'consulting' fees were paid to win concessions in the districts of Boven Digoel and Merauke. Local communities also say that they were not properly consulted.

“The company entered [Papua] without obtaining the free, prior and informed consent [of Indigenous communities],” Anselmus Amo, a pastor with the Papuan Indigenous rights organization SKP-KAMe, told Mongabay. “They just informed [their intention to establish plantations] while bringing the government and security forces. For villagers, the presence of many security officers gives pressure. This condition is what made the people decided to give up their ancestral lands without free consent.”

The company denies this. "It is not true that the company has somehow neglected community rights in Boven Digoel Regency and Merauke Regency with unfair compensation, because compensations were preceded by collective negotiation and mutual agreement with the owners of customary rights," it said in a statement posted on its website.

Some of the land was allegedly cleared by setting fire to the forests - a practice banned by law - but somehow common inside the forest concessions. The companies blame natural events such as extreme dryness and local people but an analysis of satellite imagery suggests otherwise.

“If the fires in Korindo’s concession were natural, the outbreaks would be irregular,” Samaneh Moafy, senior researcher for Forensic Architecture in London, told Mongabay. “However, tracking the movements of deforestation and fires over time shows that they clearly happen in sequence with fires following the clearance in a west to east direction and overwhelmingly happening inside Korindo’s concession boundary.”

Indeed Sefnat Mahuze, a local farmer, told the BBC that he saw Korindo employees setting the fires after collecting fallen timber. “They poured petrol over it and then lit them."

POSCO (formerly Daewoo) has also been investigated by activists over the PT. Bio Inti Agrindo oil palm plantations in Merauke province which has had a major impact on the Bian and Fly rivers. Linus Omba, a member of the Mandobo indigenous community, says that their community land was sold to POSCO for just $12,000. “This was an injustice for all the Mandobo people of this forest,” Linus said. “The company didn’t follow the proper procedure.”

In December 2019 a complaint was filed against POSCO and its financial backers - the Korean National Pension Service and the Export-Import Bank of Korea - by the Korean Transnational Corporations Watch, Yayasan Pusaka, WALHI Papua, and SKP KAMe, with Korea’s National Contact Point for the Organization for Economic Cooperation and Development.

The company has since adopted a zero-deforestation policy for its global palm oil operations but activists remain skeptical. “While POSCO’s new deforestation policy is a welcome step, it’s commitment on paper has yet to translate into action,” Jeff Conant, senior international forests program director with Friends of the Earth U.S., said in a press statement. “We continue to hold POSCO accountable for destroying Indonesia’s forests and harming indigenous communities."

Other oil palm plantations such as the Tanah Merah project in Boven Digoel district have been just as controversial. Forest clearing by a company named Digoel Agri with the help of Fabianus Senfahagi, a leader of the Auyu people, has been fiercely opposed by the local community.

“We’re demanding the government and the local council to summon the company and check their permits,” Egedius Pius Suam, another leader of the Auyu tribe, told Mongabay. “If they can’t find clear permits, then I’m asking for sanctions [to be applied] and for the company to leave.”

Digoel Agri has cleared over 170 hectares so far but the project has permits for a total of 280,000 hectares which would generate an estimated $6 billion in timber and create a plantation almost twice the size of London, say activists.

The company says it has broken no laws. “We’re obeying the rules,” Jackson Iqbal de Hesselle, a director of the JTR Resources Group, told Mongabay.