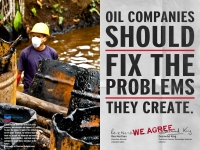 A key witness has admitted under oath that he lied on behalf of Chevron, the California oil multinational, when the company sued to overturn a $9.5 billion verdict for pollution of the Ecuadorian Amazon.

Between 1964 and 1990, a New York company named Texaco drilled for oil in the Amazon and dumped more than 16 billion gallons of toxic waste into rivers and streams. In 1993, 47 Amazonian farmers, representing 30,000 Ecuadorian farmers and indigenous tribal peoples, sued the company in a U.S. federal court in New York.

Texaco, which was later acquired by Chevron, convinced the U.S. courts to move the case to Ecuador. Unfortunately for the company, almost two decades after the case was filed, Ecuadorian Judge Nicolas Zambrano ruled that Chevron should pay to clean up the toxic mess. Instead the company counter-sued in New York claiming that the verdict was obtained by fraud and coercion.

Last year, Lewis Kaplan, a U.S. federal judge, issued a 500 page ruling that concluded that he had found "clear and convincing evidence" that environmental activists and lawyers helped Zambrano write the verdict in return for money. Now it turns out that the opposite was true.

In his ruling Kaplan relied heavily on the testimony of Alberto Guerra, a former Ecuadorian judge, who claimed that Stephen Donziger, the lawyer for the villagers, had helped Zambrano write the verdict. Kaplan dismissed the fact that Guerra was being paid $12,000 a month by Chevron as well as being supplied with a personal lawyer and a car under the company 'witness-protection program.'

Separately, in 2009, Chevron had brought an international arbitration case against the Ecuadorian government which is still ongoing. At an arbitration hearing in Washington DC earlier this year, Guerra retracted his statements to Kaplan, according to a 776 page transcript obtained by Vice News and Courthouse News.

"And among the ways you tried to leverage your position was to falsely tell the Chevron representatives that the Plaintiffs had offered you $300,000; isn't that right?" asked Eric Bloom, a lawyer for the government of Ecuador.

"Yes, sir. I lied there. I recognize it. I wasn't truthful. That statement was never made by the representatives of the Plaintiffs."

Guerra: "Sincerely, if that situation ensued, I was hoping to obtain a financial benefit of some sort myself."

Guerra: "It pains me to say it. I recognize it: A bribe."

He described in detail how Chevron showed him $20,000 in cash from a safe, and offered to increase it if he could provide them with electronic proof of any collusion between Zambrano and the activists.

However, Christopher Racich, a computer forensic expert, testified to the courts that an exhaustive analysis of the verdict showed that it was written by Zambrano and resaved hundreds of times on his personal computer. By contrast, Chevron has failed to produce any evidence of a conspiracy between Zambrano and the activists even after winning lawsuits to get their personal correspondence.

"The company spent millions to concoct its cover story," writes Paul Paz y MiÃ±o of Amazon Watch on the NGO's website. "There was only one big problem: it all hinges upon the testimony of a completely non-credible witness who has now admitted on the stand that he lied about it in exchange for payments from Chevron."

Chevron continues to maintain that it is not responsible for any of the pollution in Ecuador, and that Texaco had cleaned up whatever spills it was responsible for prior to the merger of the two companies. The company claims that whatever pollution remains in the rainforest was caused by Ecuador's national oil company, Petroecuador, which took over oil production in the area after Texaco left in 1992. The Ecuadorians maintain that Texaco designed, installed, and operated all of the cost-cutting and polluting oil production facilities that were then given to Petroecuador.

Now that the company's witness has admitted that he lied, the activists say that the U.S. Department of Justice should intervene.

"Chevron and their lawyers should be investigated and brought up on charges," says Paz y MiÃ±o. "They have intimidated judges in Ecuador, bribed others, falsified evidence, and coached Guerra to submit false testimony in U.S. Federal Court and made a complete mockery of the our judicial system."

The latest news also has major implications for a lawsuit that the Ecuadorian villagers have brought in Canada against Chevron to seize assets held by the oil company's subsidiaries in order to enforce the Ecuadorian ruling.

The Supreme Court of Canada has ruled that foreign judgments like the Ecuador ruling are enforceable in Canada if there is a "real and substantive connection" between the foreign jurisdiction and the subject matter of the claim.