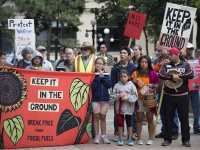 Over the last decade, oil companies have flocked to North Dakota, to extract shale oil by fracking the Bakken rock formation. Most of the crude has historically been shipped out by rail. In 2014 Texas-based Energy Transfer Partners began the process of applying for government permits to build a pipeline that would begin in Stanley, North Dakota, and snake 1,170 miles across the state border to Patoka, Illinois. The final permit was issued July 25, 2016 after the U.S. Army Corps of Engineers verified the work plans, allowing the company to project that it would be able to complete the project by the end of the year.

But the company did not consult with the tribes whose lands are likely to be affected such as the Standing Rock Sioux, despite the fact that the
pipeline will pass under the Missouri River a half mile from their reservation. "We have laws that require federal agencies to consider environmental risks and protection of Indian historic and sacred sites," Dave Archambault II, the elected chairman of the Standing Rock Sioux Tribe, said in a statement. "But the Army Corps has ignored all those laws and fast-tracked this massive project just to meet the pipeline's aggressive construction schedule."

Earthjustice, an activist group of lawyers, helped the Standing Rock Sioux challenge the permits in court. "There have been shopping malls that have received more environmental review and tribal consultation than this massive crude oil pipeline," said Jan Hasselman, an Earthjustice attorney. "Pipelines spill and leak-it's not a matter of if, but when. Construction will destroy sacred and historically significant sites. We need to take a time out and ensure that the Corps follows the law before rushing ahead with permits."

In April 2015 a protest camp was set up near Cannon Ball, North Dakota. Over the summer activists from other tribes started to arrive to join the protests. "We, along with people of all walks of life, are observing a peaceful and prayerful gathering to move an entire country," JoDe Goudy, chairman of the Yakama Nation in eastern Washington state, told the assembled protestors. "One voice, one heart, and one spirit to speak for those things that cannot speak for themselves."

Support also came from the Three Affiliated Tribes of Fort Berthold Indian Reservation in North Dakota where the oil companies are currently fracking for oil. "We share the firm belief that Dakota Access should find an alternative means and method of transporting oil to market that has less potential for negative impact to Standing Rock and the lands we have historically shared with a fellow nation, friends and relatives," Mark Fox, chairman of the Three Affiliated Tribes, wrote in a formal letter of support.

Company officials claim that the pipeline project is environmentally sound. "As one of the largest U.S. infrastructure companies, our experience in
designing, constructing, and operating natural gas, crude oil, and
refined products pipelines is extensive," Kelcy Warren, CEO of Energy Transfer Partners, wrote to his employees in a letter that was also published in the media. "We have designed the
state-of-the-art Dakota Access pipeline as a safer and more efficient
method of transporting crude oil than the alternatives being used today,
namely rail and truck."

On September 9, the courts denied the Earthjustice petition. But the scale of the protests convinced the government to reconsider. Hours after the court decision, three federal agencies - the U.S. Army, the Department of Interior and the Department of Justice - issued a joint statement ordering a temporary halt to construction while they reviewed the matter. "In recent days, we have seen thousands of demonstrators come together
peacefully, with support from scores of sovereign tribal governments, to
exercise their First Amendment rights and to voice heartfelt concerns
about the environment and historic, sacred sites.  It is now incumbent
on all of us to develop a path forward that serves the broadest public
interest," the statement said.

Now tribal activists are preparing to take the fight to the banks underwriting the pipeline construction. "We are up against the usual suspects. I'm talking Citibank. I'm talking
Wells Fargo. I'm talking JPMorgan Chase," Chase Iron Eyes, an activist and attorney from the Standing Rock Sioux Tribe, told a
rally in Washington DC last month, before the group marched on a branch
of TD Bank from Canada.

Similar protests have been held at TD Bank branches across North America from Vermont to Vancouver. (TD Bank is the 8th largest lender to the Dakota Access Pipeline,
according to a report from Food & Water Watch, providing $365
million in capital.)