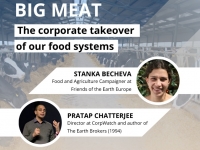 Here are some examples of Big Meat, the name given to the companies that control the meat industry.

The second biggest company is Tyson Foods, based in Springdale, Arkansas, which kills 7.8 million chickens, 70,000 pigs and 22,000 cattle every day. It has an annual revenue of $42.4 billion. Third largest company in the meat industry is Cargill of Wayzata, Minnesota, with sales of $31.7 billion a year.

The size of some of the slaughterhouses owned by Big Meat is staggering: The world’s largest pig factory is the Smithfield group’s plant in Tar Heel, North Carolina, that can slaughter 36,000 pigs daily.  And Techbank Food’s plant in Fuyang, Anhui province, China, will have a capacity of 14,000 pigs per day when it is completed.

But these numbers don't even tell the whole story. Some 200 million animals are put to death every year in France, including 50 million chickens, without being consumed by humans. And in Germany, up to 50 million male chicks and 200,000 male calves are killed without being eaten. Some die as they are being raised, others are dumped because they don't have enough meat, writes Dr. Jonas Luckmann.

Most of these animals don't graze outside - instead they live in vast feedlots and food is brought to fatten them up every day. "The industrialization of livestock farming and the rising numbers of farm animals require more and more feed made from cereals and oilseeds," Dr. Christine Chemnitz explains in the Meat Atlas. "This in turn makes it necessary to convert forests and pastures into arable land. Its negative effects on the climate and the environment have made meat one of the most problematic consumer goods in the world."

"The current animal protein-centred food system is having a devastating impact on climate, biodiversity and is actually harming people around the globe,” Becheva recently told the Guardian newspaper. "We need to begin reducing the number of food animals on the planet and incentivise different consumption models.”​

To learn more, watch the video on YouTube here:

The Meat Atlas 2021 report can be read at this link. 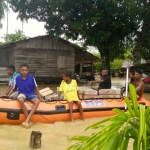