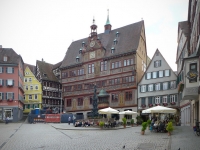 In a country known for its sausages, schnitzels and other meat-filled traditional foods, the German city of Tübingen stands out. Considered one of the most vegan-friendly and eco-friendly cities in Europe, Tübingen was recently sued by a franchisee of the fast food chain McDonald’s over a new packaging tax.

Tübingen ordered local businesses to pay a new tax on disposable packaging and cutlery beginning in January 2022. Packaging – from coffee cups to ice cream bowls – incurred a fee of €0.50 (US$0.49) and cutlery incurred a fee of €0.20 (US$0.20). The idea of the tax was to convince people to choose reusable alternatives by increasing the price of disposable ones. Just one month after the tax was implemented, it seemed to have its desired effect, with the city reporting 15 percent less waste.

But the new law was not well received by everyone. A year before the tax took effect, Susanne Heppert, who runs a McDonald's franchise in Tübingen, sued the city in the Mannheim Administrative Court. The lawsuit alleged that the tax went against federal waste laws that stipulate that such regulations should be imposed at the federal level rather than the local municipal level.

Heppert claimed that the additional costs would hurt her business. “If I pass the price on to the guests, those on a tight budget will no longer be able to come. If I bear the costs myself, we are talking about an additional yearly cost of at least six digits,” she was quoted as saying in the Frankfurter Allgemeine Zeitung.

McDonald’s Germany issued an official statement in support of Heppert: “There cannot be local isolated solutions and special routes for each of the more than 10,000 towns and communities in Germany,” the company wrote.

But Boris Palmer, the city’s mayor and a Green Party politician, fought back. “Anyone who builds their business model on the destruction of the environment should rethink their business model,” he told SWR Aktuell, a regional newspaper. Barbara Metz, the deputy federal manager of Deutsche Umwelthilfe (German Environment Aid), a major German environmental group, agreed. “Instead of significantly reducing its more than 51,000 tons of packaging waste every year, the billionaire company is trying to slow down environmental and climate protection,” she told SWR Aktuell.

McDonald’s, which is headquartered in Chicago, is the largest restaurant chain in the world by revenue, with over 40,000 locations in dozens of countries worldwide. It has long been criticized for a range of issues ranging from causing obesity due to its unhealthy food to evading taxes to underpaying its workers.

Most recently, the company has been in the spotlight in Germany over its packaging: where the fast-food chain produced almost 70,000 tons of waste in 2020 and appears to have no plans to change this policy despite the fact that it is testing the use of reusable packaging in both France and the UK. (McDonald’s has no choice in France since fast-food chains will be banned from using single-use packaging from January 1 of next year)

“It is particularly incomprehensible to us that McDonald's uses disposable tableware for on-site consumption. In almost every other restaurant in Germany you get normal dishes that are cleaned in the dishwasher and reused hundreds of times,” Elena Schägg, a recycling management specialist at Deutsche Umwelthilfe, told Frankfurter Allgemeine.

It's not the first time that a German city has been sued over packaging laws. In 1998, McDonald's won a lawsuit in the Federal Constitutional Court against the central German city of Kassel, the first in the country to introduce a municipal packaging tax.

At the moment, the odds are stacked against Tübingen. The Mannheim Administrative Court ruled in favor of McDonald’s in March 2022, reiterating that regulations on packaging waste are solely a matter for the federal government.

Mayor Palmer expressed his disappointment over the ruling. “We have shown that the tax works in practice. Reusable packaging is spreading all over Tübingen, the city is becoming cleaner, the vast majority of people are satisfied. Nationwide, the trend is the opposite: reusable items are being pushed out, the waste culture is gaining ground. This verdict is therefore a disappointment,” he was quoted as saying in the Reutlinger General-Anzeiger.

And the city of Tübingen has refused to back down. It has appealed the March ruling to the Federal Administrative Court. With the support of Deutsche Umwelthilfe, the mayor is pushing for Steffi Lemke, Germany’s environment minister, to take a stance. Until the appeals court makes a decision, the Tübingen council has decreed that the packaging tax must remain in place.