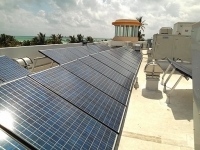 Two of the biggest U.S. energy utilities - NextEra and Southern Company – have been using Matrix LLC, a secretive political consulting firm in Montgomery, Alabama, to fight regulators and progressive politicians in states like Alabama, Florida, Georgia, Louisiana, Mississippi and Virginia, according to a slew of leaked internal memos.

For over a century, electricity in the U.S. has mostly been provided by large private monopolies that served specific states. NextEra Energy was originally named the Florida Power & Light Company (FPL) when it was founded in 1925. Today it is is the biggest provider of electricity in Florida with 5 million customers. Southern Company, which was founded in 1947 and is based in Atlanta, owns Alabama Power, Georgia Power and Mississippi Power and sells electricity to 9 million customers.

“We have this incredible corruption because [NextEra and Southern] are using their advantage to hang on to power and undermine democracy,” Howard Crystal, an attorney for the environmental group Center for Biological Diversity, told the Guardian newspaper.

Over the last 25 years, NextEra and Southern have channelled tens of millions of dollars to Matrix and an affiliated public relations firm named Perkins Communications. (Both firms were founded by a man named Joseph Perkins Jr.) For example, NextEra paid Matrix over $14 million in 2018 alone, according to leaked documents, while Matrix and Perkins were paid approximately $2.5 million by Alabama Power over an 18 month period in 2018 and 2019, according to leaked contracts.

In order to do this, NextEra hired Matrix, which undertook a number of dirty tricks to successfully kick Rodríguez out of office in 2020.

It conducted a similar campaign to spend money on behalf of FPL in 2018 to help keep Keith Perry, a Republican state senator in Florida, in office. “Bottom line is we are the ones with the check books and in control 100 percent,” Matrix CEO Jeff Pitts wrote in a text message.

“This is election rigging. You have a powerful corporate player in Florida politics using its financial resources to defeat a candidate without any disclosure to the public," Saurav Ghosh, director of federal campaign finance reform at the nonpartisan Campaign Legal Center in Washington, D.C., told the Miami Herald.

Matrix conducted similar tactics in 2018, on behalf of NextEra, to oust Phillip Stoddard, the mayor of South Miami who also proposed to allow landlords to install rooftop solar in 2017, but was not successful in unseating him from his job, despite distributing false allegations of sexual improprieties against him.

"FPL has bought political control of the Legislature, the Cabinet, and the [Florida Public Service Commission]," Stoddard told the Miami New Times. "It throws corporate money against any candidate who doesn't toe their line."

In 2019, Matrix also helped engineer the secret purchase of The Capitolist, a popular local website in Tallahassee, Florida, in order to drum up support for NextEra Energy.

In Alabama, Matrix was paid by Southern Company to monitor local environmental groups, regulatory agencies and boards and fight any proposals that might reduce profits. In order to do this, Matrix set up fake citizen groups like the JobKeeper Alliance and the Partnership for Affordable Clean Energy to support the company’s policies.

In 2014, Matrix helped distribute fliers in Birmingham, Alabama, for a campaign against plans by the U.S. Environmental Protection Agency test their soil for the presence of contaminants left by ABC Coke, a subsidiary of Drummond Coal. Oliver Robinson, a former basketball star and a local politician who worked on the campaign, went to prison for his role although Matrix was never charged. At a court hearing, one of the lawyers said to Robinson: "You were willing to sell out your community for chump change?" "Now that I look back on it," he replied. "I sure did."

Matrix denies that it is involved in dirty tricks. “Matrix specializes in assisting clients with highly sensitive and crisis situations,” the company wrote in a recent reply to a lawsuit. “Matrix also provides more general political consulting services to clients and advises clients on strategic communications to the general public, business and political stakeholders, and other external groups. Through this work, Matrix often has access to highly confidential and proprietary information about its clients and their business operations.”