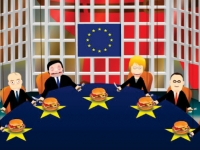 Should lobbyists for biotech and food companies be allowed to make the rules on scientifically questionable products sold in the supermarket and - by default - your kitchen? The companies like the idea because they stand to make a huge profit. Yet the European Food Safety Agency (EFSA) appears to have failed to properly regulate such conflicts
of interest.

EFSA, based in Parma, Italy, investigates food and feed safety, nutrition, animal welfare, plant protection and health. The agency's assessments - which are conducted by expert panels - are used by the European Commission in Brussels to decide whether to authorize products on the European market.

Meet Mella Frewen, our exhibit #1. She was a food lobbyist for Monsanto, the U.S. biotechnology giant and Cerestar, then Europe's biggest starch producer. Then she moved to become director general of the Confederation of the Food and Drink Industries of the EU and now EFSA wants to appoint her to their management board.

Would that be a conflict of interest? Nina Holland from the Corporate Europe Observatory (CEO) thinks so. "The EU Commission is not doing ESFA any favours by nominating a food lobbyist as candidate for the agency's management board. If EFSA is to regain its independence in the future, people with ties to industry should be excluded from the (expert) panels as well as from the management board," she says.

This revolving door works both ways. The men and woman at EFSA know that they can get good jobs in industry if they quit, to help lobby their former colleagues to weaken regulations.

Meet exhibit #2: Suzy Renckens, who ran EFSAÂ´s GMO (genetically modified organisms) unit from 2003 to 2008. In 2008, Suzy Renckens was hired by biotechnology corporation Syngenta, which produces and markets genetically engineered plants, to become a lobbying for the company in Brussels.

Catherine Geslain-LanÃ©elle, the executive director of EFSA, recently admitted to European Union Ombudsman in Strasbourg that the agency had "regrettably" made a mistake by not properly examining the potential conflicst of interest. "Before leaving EFSA, Ms Renckens did not provide substantial details about her new employment. EFSA was still unfamiliar with this kind of occurrences and no specific processes were in place at the time," wrote Geslain-LanÃ©elle in a letter that was released to the public yesterday.

Now for exhibit #3: Harry Kuiper was the chair of the so-called GMO panel at EFSA for nearly ten years. In that time, EFSA moved from a ban on genetically modified organisms, to approving two and eventually 38. Throughout that period, Kuiper had strong ties with the International Life Sciences Institute (ILSI), which is funded by agrochemical companies and the food industry.

"We urgently need more clarity. Harry Kuiper has been involved in each and every case of risk assessment of genetically engineered plants since the start of EFSA," says Christoph Then of Testbiotech in Munich, Germany, who brought a complaint against Kuiper to the EU Ombudsman in March. "The public has a right to know if consumers and the environment were really protected in the best possible way."

Testbiotech and CEO says the Renckens case also want further action by EFSA to show that they are serious about banning conflicts of interests. "EFSA should have admitted its problems much earlier. (I)t is still not clear if EFSA will stop such a move to industry in the future," says Then.

(Full disclosure: This writer serves on the advisory board of the Corporate Europe Observatory)