Co. Monday announced plans to slash more than 20,000 jobs world-wide,
shift production out of Japan and seek government assistance from
Japan, the U.S. and elsewhere, part of a broad new effort by the
Japanese car maker to weather the economic downturn. 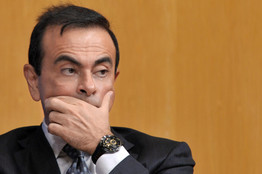 Nissan's cuts are a setback for CEO Carlos Ghosn, shown above last month.

Japan's
third-largest car maker by sales also is suspending its goal of 5%
annual revenue growth until 2012, which had been a key commitment of
its current management plan.

Nissan's broad, new recovery program comes as the car maker --
reeling from falling demand world-wide, a global credit crunch and a
soaring yen -- swung to a net loss of Â¥83.2 billion ($904.2 million) in
its fiscal third quarter ended Dec. 31, sharply down from Â¥132.22
billion in profit in the same period a year earlier.

For this fiscal year, the car maker forecast a net loss of Â¥265
billion -- its first net loss since President and Chief Executive
Carlos Ghosn took the helm in 1999 and led Nissan's revival from the
brink of collapse.

The projected profit loss is a serious setback for Mr. Ghosn, who
has been considered the industry's top manager, credited with forging a
complex alliance between Nissan and Renault SA.

Nissan's dismal outlook caps a string of grim forecasts by Japan's
auto makers, which are cutting jobs, slashing production and taking
other measures to stem growing losses as the sales downturn deepens.

"The global automotive industry is in turmoil, and Nissan is not an
exception. When revenue falls quickly and significantly, it creates a
situation that is both unsustainable and potentially dangerous," Mr.
Ghosn said.

Like its Japanese rivals, Nissan has been battered by the gathering
strength of the yen, which diminishes the value of overseas earnings
and drives up the cost of vehicles produced in Japan for consumers
abroad.

But Nissan is the first Japanese auto maker to announce major plans
to move production -- and jobs -- from Japan to lower-cost markets in
order to escape the impact of the strong yen.

The
auto maker announced last month that it would move production of the
Nissan March, its top selling compact car, to Thailand from Japan.
Nissan expects this is just the beginning of a substantial exodus of
parts and vehicle production out of Japan to lower-cost markets.

Nissan has no plans to close plants as a result of the changes, said
Simon Sproule, a Nissan corporate vice president. But Nissan expects
that more than half of the more than 20,000 job cuts, which are
expected by March 2010, will be in Japan. The remaining job cuts will
be mainly in North America and Europe, Mr. Sproule said.

Nissan had 240,000 employees in March 2008. It has already
eliminated about 2,000 temporary jobs in Japan and has announced plans
for about 4,000 more job cuts at factories in Spain and the U.S. It has
scaled back global production and slowed assembly lines to shrink its
inventory as car sales in the U.S. and in other parts of the world have
plummeted.

The company also will trim model introductions over the next four
years, releasing an average of 10 new vehicles a year instead of its
original goal of 12 a year, the person said.

But Nissan isn't making cuts to its program aimed at producing an
electric vehicle by next year2010. The auto maker plans to tap a U.S.
Department of Energy $25 billion loan program aimed at helping the
industry develop more fuel-efficient vehicles, making Nissan the first
Japanese auto maker to seek the funds. Nissan also is considering
applying for low-interest loans from the Japanese government as part of
an effort by the Development Bank of Japan to assist businesses hurt by
the global financial crisis.

To oversee its cost-saving efforts, Nissan is appointing Colin
Dodge, a member of the company's executive committee, to the new
position of chief recovery officer.

Mr. Ghosn, the CEO, will continue to head Nissan and its partner,
Renault, dedicating much of his time to encouraging governments
world-wide to grant tax breaks, build recharging stations and offer
other support needed to expand use of electric vehicles.