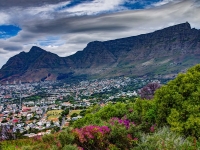 The company will be the main tenant in a 150,000 square meter mixed-use development owned by Liesbeek Leisure Properties Trust on the site of the former River Club golf course that was approved by the government of the Western Cape in April. Construction on the R4.6 billion ($308 million) project started right away and is expected to take two years.

Opposition is led by activists from the Khoi and San indigenous communities who have held prayers at the site, organized marches and sued the city to stop the project. The Khoi consider the site to be their birthplace and therefore a sacred site. It is also the site of the first battle the Khoi had with European colonizers over 600 years ago, in 1510.

“Would Jeff Bezos go into a Native American territory and decide to completely devastate its most sacred terrain to put up an Amazon headquarters?” Tauriq Jenkins, the high commissioner for the Goringhaicona Khoi-Khoin Indigenous Traditional Council, asked the Wall Street Journal. “It makes a Disneyland of our heritage.”

The developer claims that River Club will bring thousands of jobs to the area. "It's so desperately needed, especially post-Covid and some of the riots and troubles we've had in South Africa,” Jody Aufrichtig, trustee and spokesman for Liesbeek Leisure Properties Trust, told the BBC. "It will give the people of Cape Town and South Africa hope and economic development."

Liesbeek is backed by city politicians. “It is actually assisting our economy to lift its head. That is what Cape Town needs right now – and that is why I’m so chuffed about the Amazon announcement, their African head office right in our backyard,” Dan Plato, executive mayor of Cape Town, told BizNews. “Amazon have killed a number of cats for us with this development, with their integrated approach. Other businesses needs to take a leaf out of this and say that is the way of bringing the whole of Cape Town together.”

But community activists say that this is simply not true. This past June, 50,000 people signed a petition opposing the development (the population of Cape Town is 433,000) organized by the indigenous communities, the Observatory Civic Association, the Salt River Heritage Society, Bo-Kaap Civic and Residents Association. The petition was handed to the mayor’s office after a rally where protestors held up signs that read ‘Stop Amazon’s greed,’ ‘50,000 Say No,’ and ‘Stop Amazon’s Heritage destruction.'

Experts say that the impact of the River Club development will extend beyond the historical and sacred. Jens Horber, an urban planner in Cape Town, notes that the project is located in a floodplain that plays a vital role in absorbing stormwater from the Liesbeek and Black rivers which flow from Table Mountain slopes as well as the Tygerberg Hills and the northwestern parts of the Cape Flats.

“To approve such a large development in a vital floodplain is a risk to city infrastructure and finances, surrounding properties, and to physical safety,” Horber writes in the Daily Maverick. “This is the development’s fundamental flaw.”

He notes that the construction violates multiple local development plans such as the Floodplain and River Corridor Management Policy and the Management of Urban Stormwater Impacts Policy, both of which were drawn up in 2009, as well as the Table Bay District Plan of 2012.

Indeed, the city of Cape Town’s own Environmental Management Department opposed the River Club development on 12 different grounds including the “significance of the habitat of the Liesbeek River, and the need to maintain the ecological linkages across the River Club site, for frogs, otters and birds which move to and from the Liesbeek River and the Raapenberg wetlands, noted by various specialists and members of the public.”

Despite the fact that construction has already begun, Liesbeek Leisure Properties Trust’s plans could yet be halted. The Goringhaicona Khoena Council has asked Cape Town's High Court to review the city's approval of the project and to halt all construction.

“A more fitting use of the site would be as a truly publicly accessible indigenous heritage park, not a private golf course as it has been, or the privately owned, access-controlled and securitised open space that is planned as part of the dense approved development,” writes Horber who believes that the site could be revegetated and restored.

And Jenkins notes that there are other suitable sites for Amazon. "The reason why this development is so expensive is because it's on a floodplain," he told the BBC. "If Amazon and the developer could take its money and build the same scale development off this flood plain, you'd find the size of the development three to four times bigger, which means you'd be able to employ exponentially more people.”