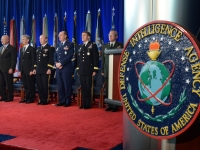 Google and Facebook have discussed - and possibly built - special portals for the U.S. government to snoop on user data, according to revelations sparked by an investigative series of articles by Glenn Greenwald of the Guardian.

Martin Dempsey, the chairman of the Joint Chiefs of Staff (the top military adviser to the Pentagon and the White House) has made a series of trips to Silicon Valley in northern California to meet with Facebook, Google, Intel and Microsoft, to attempt to persuade the technology companies to help them spy on users.

Information about the program came out soon after the Guardian first published a secret U.S. government court order for Verizon, a major U.S. telecommunications company, to give the U.S. National Security Agency (NSA) and the Federal Bureau of Investigation (FBI) access to "metadata" on their clients phone calls. This data is arguably more important than the content of the calls, since it reveals the network of who talks to who and when, allowing patterns to be identified about individuals and groups.

The Guardian followed this up by revealing an NSA program named Prism that allowed the government to review contents of emails as well as audio and video conversations. A slide from a 41 page presentation made in April 2013, lists Facebook, Google, Microsoft, PalTalk and Yahoo and even provided the dates that the companies "joined" the scheme. It also mentions a project called "Upstream" that allows the NSA to collect information from "fiber cables and infrastructure as data flows past."

This corresponded to testimony provided by James Clapper, Director of National Intelligence, to Senator Ron Wyden in March at a Senate Intelligence Committee hearing in March. "Does the NSA collect any type of data at all on millions or hundreds of millions of Americans?" he asked. "No, sir," Clapper answered.

On Friday it turned out that each of them had lied or been misinformed. "(I)nstead of adding a back door to their servers, the companies were essentially asked to erect a locked mailbox and give the government the key, people briefed on the negotiations said," writes Claire Cain Miller in the New York Times. "Facebook, for instance, built such a system for requesting and sharing the information, they said."

On Friday, President Barack Obama acknowledged the existence of both programs but said people should not be worried: "Nobody is listening to your telephone calls," he said at a press conference. "That's not what this program is about. As was indicated, what the intelligence community is doing is looking at phone numbers and durations of calls. They are not looking at people's names, and they're not looking at content. But by sifting through this so-called metadata, they may identify potential leads with respect to folks who might engage in terrorism"

Ben Wizner, director of the American Civil Liberties Union's Speech, Privacy & Technology Project, explains however that tracking metadata is actually far more significant and worrisome. "Repeated calls to Alcoholics Anonymous, hotlines for gay teens, abortion clinics or a gambling bookie may tell you all you need to know about a person's problems," Wizner wrote in an op-ed with his colleague, Jay Stanley. "In addition sophisticated data-mining technologies have compounded the privacy implications by allowing the government to analyze terabytes of metadata and reveal far more details about a person's life than ever before. So we shouldn't be comforted when government officials reassure us that they're not listening to our communications - they're merely harvesting and mining our metadata."