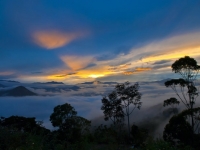 Mineral exploration in the Los Cedros forest began in March 2017 after the Ecuadorian government granted mining access and exploration rights for 68 percent of Los Cedros forest to ENAMI and Cornerstone. In late 2018, the autonomous Cotacachi government filed a lawsuit demanding an end to this access, claiming the exploration violated the rights of nature upheld by Article 71 of the Constitution of Ecuador.

“The government turned over 70 percent of the Intag Valley into mining concessions, yet they did not do a single consultation — not with the communities, not with the local authorities,” Jose Cueva, planning director at the Cotacachi government, told Cuenca High Life website. “According to the constitution, they are required to talk with local officials before allowing concessions.”

Researchers at the University of Oregon say that the two companies have already conducted mineral exploration in the headwaters of a 17,000 acre cloud forest home for two critically endangered species, 24 endangered species, and 178 threatened species, which are likely to be impacted.

"They (the mining companies) have to build trails, they have to build roads, they'd have to start tearing up the forest to get those drilling platforms up here... it'd be the end of this pristine area,"  Josef DeCoux, director of Los Cedros Forest, told Reuters.

“If mining started in Los Cedros, species would go extinct, without a doubt,” Roo Vandegrif, a University of Oregon researcher, told Mongabay, an online environmental journal. Vandegrif says that the local environment is likely to be threatened by the toxic waste material stored in a potential mine’s tailing pods that he believes could leak, given the heavy rainfall in the region that averages 400 centimeters a year.

The Cotacachi government has also sued Ecuador's Ministry of Environment, alleging that the ministry had failed to inform or get consent from the Cotacachi community before granting ENAMI mining access, in violation of Article 184 of the Law on Mining.

In 2019, a provincial court ruled in favor of the Cotacachi government. In the wake of this ruling, ENAMI appealed the decision, sending the case to Ecuador’s Constitutional Court. Typically Ecuador’s Constitutional Court takes years to respond and rule on similar actions for environmental protection, so it is likely to be several years before it addresses this matter. (Indeed, the court is currently addressing claims from 2013 and 2014.)

While this appeal remains pending, ENAMI has been banned from further exploration. ENAMI’s website claims that there had been "no tree-clearing in the Rio Magdalena 1 and 2 mining projects" while Brooke Macdonald, Cornerstone Capital Resources CEO, has issued statements claiming that "no water is used and no trees are cut" so far in the exploration. ENAMI EP has also taken a public relations approach by claiming that it practices responsible mining, by sending out tweets with the hashtag #miningwithresponsibility.

"We will follow the law, but this decision of this lower court in Imbabura is subject to appeal, and we believe that the lower court erred in law and is incorrect… If we lose the appeal then we'll be out of there," Macdonald told shareholders at a recent meeting.

However, when reporters from the Thomson Reuters Foundation went out to the site, they found an area of 100 square meters had already been destroyed and deforested.

In addition Ecuadorian organizations Observatorio Minero Ambiental & Social del Norte de Ecuador (OMASNE) say that ENAMI and Cornerstone are not taking the lower court order seriously. They claim that Cornerstone continues to sign and buy land agreements in the area and “continue to conduct mining exploration illegally in the area of influence of Los Cedros Protective Forest”.

Indeed, ENAMI has continued to play a significant role in the region, according to their own Twitter feed. In March 2020, the company tweeted that they had loaned equipment to the decentralized autonomous government of García Moreno parish, to carry out road repairs benefitting the communities of Magdalena Alto and Brilla Sol.

Sadly, past forest explorations in Ecuador have not been responsible at all. Some 96 percent of Western Ecuador had been deforested by 2000, and Los Cedros Forest is one of the last biodiverse untouched watersheds. And according to a study conducted by Australia’s Rainforest Information Centre, other Ecuadorian protected forests such as the Molleturo-Mullopungo Protected Forest face a similar future with some 90 percent of their land under mining concessions.