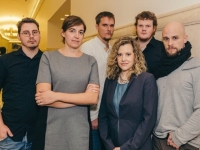 “When you’re really drinking the government Kool-Aid, it’s very
easy to get caught up in the group think. [But] we were playing the game of Whack-A-Mole. How many of those people did we kill? [Yet] the next day, there were all these new targets. I began to see a real lack of foresight.”328

“There was absolutely a lot of guess work involved, a lack of coordination. We lacked a central database. Can you imagine it? To keep all of our targets organized. [Meanwhile] there was constant turnover amongst [drone operators] in the war, you had new people coming in every few weeks, every few months. Sometimes there was only 24 hours continuity between people. So if there was one person who was an expert on a target, when the new person comes in, suddenly all that information is gone. So [when] someone new [arrived], for all they know there’s a bunch of chickens running around as opposed to a bunch of children.”329

“We have sanitized killing and condoned extrajudicial assassinations: death by remote control, war made easy without due process, protecting ourselves from the human cost of war.”331

“The reason why I became a shareholder [of Honeywell] is because I was frustrated with the lack of progress through legislative advocacy, and I believe what we are facing in our country is not just a military-industrial complex, that Eisenhower wrote about, it’s a military-industrial-congressional complex.”332

Brandon Bryant: “I killed 13 people with a total of five Hellfire missile shots, and only three of them were actual combatants.”

Amy Goodman (interviewer): “Who were the others?”

“This figure runs around the corner, the  outside, toward the front of the building. And it looked like a little kid to me. Like a little human person. There’s this giant flash, and all of a sudden there’s no person there. [I] asked, “Did that look like a child to you?” They typed a   chat message to their screener, an intelligence observer who was watching the shot from ‘somewhere in the world’—maybe Bagram, maybe the Pentagon. And he says, ‘Per the review, it’s a dog.’”334

“Combat is combat. Killing is killing. This isn’t a video game. How many of you have killed a group of people, watched as their bodies are picked up, watched the funeral, then killed them too?”335

“Ever step on ants and never give it another thought? That’s what you are made to think of the targets—as just black blobs on a screen. You start to do these psychological gymnastics to make it easier to do what you have to do—they deserved it, they chose their side. You had to kill part of your conscience to keep doing your job every day—and ignore those voices telling you this wasn’t right.”336

“It was a pretty fucked up time. There was a lot of coke, speed, and that sort of thing. Everyone drank. We used to call alcohol drone fuel because it kept the program going. If the higher ups knew, then they didn’t say anything, but I’m pretty sure they must have known. It was everywhere.”337

Stephen Lewis: “It was late 2009, and I was tasked to go support a troop in contact. It was four guys walking down a mountain path. And I didn’t see any weapons. I didn’t see anything. We were given clearance to fire the missile. About five minutes goes by, and two Hellfires come in and they kill three people. And there was one wounded guy left. And that guy just—he just wasn’t there anymore.”

Juan González (interviewer): “This is—you were given clearance to fire at the wounded guy on the  ground.”

“You’re creating an atmosphere of fear. And there’s an old saying in Texas: You don’t back a scared animal up against the wall. And if you do that, he’s going to come out fighting. And that’s exactly, I think, what’s happening now.”339

“The U.S. and British militaries insist that this is an expert program, but it’s curious that they feel the need to deliver faulty information, few or no statistic about civilian deaths, and twisted technology reports on the capabilities of our UAVs.”340

“Hearing politicians speak about drones being precision weapons [makes it seem like they’re] able to make surgical strikes. To me it’s completely ridiculous, completely ludicrous to make these statements.”341

“We always wonder if we killed the right people, if we endangered the wrong people, if we destroyed an innocent civilian’s life all because of a bad image or angle.”342

“When you are exposed to it over and over again it becomes like a small video, embedded in your head, forever on repeat, causing psychological pain and suffering that many people will hopefully never experience.”343

“There’s a bomb. They drop it. It explodes. Then what? Does somebody go down and ask for somebody’s driver’s license? Excuse me sir, can I have your driver’s license, see who you are? Does that happen? I mean, how do we know? How is it possible to know who ends up living or dying?”344

“I just want people to know that not everybody is a freaking terrorist, and we need to just get out of that mindset. And we just need to see these people as people— families, communities, brothers, mothers, and sisters, because that’s who they are. Imagine if this was happening to us. Imagine if our children were walking outside of the door, and it was a sunny day and they were afraid because they didn’t know if today was the day that something would fall out of the sky and kill someone close to them. How would we feel?”345

“We are participating in a war overseas. And we have no connection to it other than wires and keyboards. Because if that’s the only connection, why stop?”346

“Within the system, the responsibility for killing the person is divided, so nobody feels the full responsibility of what they’re doing. And I think that we’re moving towards a world where—in aerial warfare, where increasingly there’s going to be more technicians and less decision makers.”347

“Every time we kill a civilian, it creates hatred in the families. If they don’t have anywhere else to turn, they are going to turn to radical organizations.”348

“[Drones] just embolden commanders, they embolden decision makers. Because there is no threat [to U.S. soldiers], there is no immediate consequence.”349

“When we are in our darkest places and we have a lot to worry about and we feel guilty about our past actions. It’s really tough to describe what that’s like. Having the image in your head of taking your own life is not a good feeling.”350

We are former Air Force service members. We joined the Air Force to protect
American lives and to protect our Constitution. We came to the realization that the innocent civilians we were killing only fueled the feelings of hatred that ignited terrorism and groups like ISIS, while also serving as a fundamental recruitment tool similar to Guantanamo Bay. This administration and its predecessors have built a drone program that is one of the most devastating driving forces for terrorism and destabilization around the world.

We witnessed gross waste, mismanagement, abuses of power, and our country’s leaders lying publicly about the effectiveness of the drone program. We cannot sit silently by and witness tragedies like the attacks in Paris, knowing the devastating effects the drone program has overseas and at home. Such silence would violate the very oaths we took to support and defend the Constitution.

I hereby resign my commission as an Officer in the United States Army.

I resign because I refuse to support U.S. armed drone policy. The Executive Branch continues to claim the right to kill anyone, anywhere on earth, at any time, for secret reasons, based on secret evidence, in a secret process, undertaken by unidentified officials. I refuse to support this policy of unaccountable killing.

I resign because I refuse to support U.S. policy of preventive war, permanent military supremacy and global power projection. The Executive branch continues to claim extra-constitutional authority and impunity from international law. I refuse to support this policy of imperial overstretch.

I resign because I refuse to serve as an empire chaplain. I cannot reconcile  these  policies with my sworn duty to protect and defend America and our  constitutional democracy or my covenantal commitment to the core principles of my religion faith. These principles include: justice, equity and compassion in human relations, a free and responsible search for truth; and the inherent worth and dignity of every person.