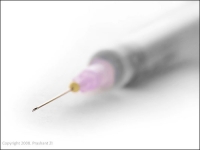 U.S. imports of sodium thiopental - often called the "truth serum" - have been banned by a judge because of the poor quality of imports, particularly from the UK. The ruling has struck a serious blow against the death penalty in the U.S., because of the key role the drug plays in lethal injections. Not surprisingly, the state of Texas, which carries out the largest number of executions in the country, is furious.

The United States is the only Western country that executes prisoners. It ranks fifth in the world of countries that do so, after China, Iran, Saudi Arabia, and Iraq, just ahead of Yemen, according to Amnesty's latest report on the death penalty. Authorities typically administer sodium thiopental as the first of cocktail of three drugs, to kill prisoners on death row.

Hospira, the only U.S. manufacturer of the drug, initially suspended production in the summer of 2010 because of quality control issues and then decided to exit the market altogether. This was because after the patent for the drug expired, the price plummeted to the point where the company could no longer compete with generic versions produced in other countries like India.

Enter Dream Pharma, a one-man operation above a driving school in Acton, West London. Mehdi Alavi, an Iranian-British businessman, who runs the company, did a brisk business selling of sodium thiopental to states like Arizona and Georgia.

The trouble with Alavi's scheme was that the U.S. Food and Drug Administration has never approved the import of sodium thiopental. Arizona inmate Donald Edward Beaty and several others sued in February 2011 to stop executions over this discrepancy. Beaty was executed with pentobarbital sodium injection instead last year, but the case eventually went before U.S. District Judge Richard Leon who ruled that the imports were illegal.

"The FDA appears to be simply wrapping itself in the flag of law enforcement discretion to justify its authority and masquerade an otherwise seemingly callous indifference to the health consequences of those imminently facing the executioner's needle. How utterly disappointing!" Leon wrote in his final opinion.

Maya Foa, an investigator with Reprieve, a UK charity that campaigns against the death penalty, said:  "Judge Leon's strong judgment in this case is most welcome, and will hopefully spell the end of the sordid scramble for execution drugs which we've witnessed over the past 18 months."

Reprieve, which exposed Alavi's contracts with the state of Georgia, is now leading a campaign to get pharmaceutical companies to sign a tailor-made "Pharmaceutical Hippocratic Oath" that states: "We dedicate our work to developing and distributing pharmaceuticals to the service of humanity; we will practice our profession with conscience and dignity; the right to health of the patient will be our first consideration; we condemn the use of any of our pharmaceuticals in the execution of human beings."

On March 28, 2012, Lundbeck, a Danish company, became the first to sign the oath. The company which is the only licensed U.S. producer of pentobarbital sodium (one of the drugs used to kill Beaty) has already stated that it will not sell Nembutal to prisons in U.S. states that carry out executions.

Texas authorities are furious. In a letter sent to the state attorney general, the Texas Department of Criminal Justice, says that Reprieve "crosses the line from social activists dedicated to their cause to authoritarian ideologues who menace and harass private citizens who decline to submit to Reprieve's opinion on the morality of capital punishment by lethal injection."

The prison authority goes on to compare Reprieve's tacticts to "classic, hallmark practices comparable to practices by gangs incarcerated in the TDCJ who intimidate and coerce rival gang members and which have erupted into prison riots."

However the Texas Department of Criminal Justice stops short of suggesting the death penalty for human rights activists.