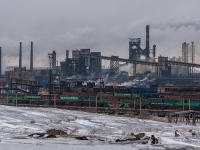 However, the terms of the September 2022 announcement – 100,000 tree saplings by the end of year and a wind power plant - appear to confirm what local critics have long claimed. “When it comes to environmental matters, we can only influence the number and type of trees [ArcelorMittal] plant[s],” Oleg Gusev, a local investigative journalist and one of the fiercest critics of the plant, told independent Kazakh journalist Vadim Boreiko in a video interview last November. “But [nothing] related to production.”

The sprawling Temirtau complex, was built during Soviet times, and sold in 1990 to ArcelorMittal, a Luxembourg-based company owned by British South Asian billionaire Lakshmi Mittal. It encompasses eight coal mines and one of the world's largest integrated steel plants.

Smokestacks at the steel plant emit a sparkling black dust which local residents often collect with magnets. "They fly out along with the smoke and settle everywhere: on windows, on windowsills, and what is most dangerous – in the lungs,” Voitsekhovsky told Khabar, the state television channel.

The pollution has had a serious impact on the health of local children, say experts. "The index of physical development of the boys is behind age norms. The sexual development level of one third of surveyed girls is below normal,” wrote Dr. Ayman Mussina, the chief scientific secretary of the Kazakhstan’s National Center for Occupational Health, in a 2012 paper. “The study of the brain development of adolescents shows the signs of stress. In adults – symptoms of chronic fatigue and depression were observed. Accelerated pace of aging, especially in women.”

In January 2018, the city of Temirtau was covered in black snow. "The snow acts as a litmus test, revealing the frightening scale of these harmful emissions," wrote angry residents of the town in a letter addressed to Aliya Nazarbayeva, the head of the Association of Ecological Organisations of Kazakhstan.

In recent months, the Kazakh government, which relies on millions of dollars in tax revenues from the plant, has started to criticize ArcelorMittal over its abysmal safety record. For example, a report from CEE Bankwatch chronicled over 100 deaths at the ArcelorMittal complex in Temirtau over the span of seven years, ending in 2010. In November 2021, six workers were killed in a methane explosion at the Abayskaya coal mines in the ArcelorMittal complex and as recently as June 2022, five workers were killed in two accidents at the steel plant. A list published that same month indicated that ArcelorMittal had been fined for over 200 health and safety violations.

“We cannot put up with the situation when 10-12 people die at work every year,” Alikhan Smailov, the Kazakh prime minister, was quoted as saying in a government press release after a visit to Temirtau the same month. “The outdatedness of the equipment is very high, and the level of investment in modernization is two three times lower compared to other enterprises.”

Yet cynics will note that these concerns come at a time when the government is looking for ways to appease citizens.

Over the last year, Kazakhstan has been rocked by major protests by workers across the country over low wages and high prices – notably in January 2022, when some 225 people were killed in violent clashes with security forces. The ensuing crisis prompted Kassym-Jomart Tokayev, the president of Kazakhstan, to announce a snap presidential election in November 2022. (Tokayev, who came to power in 2019, is only the second president since the fall of the Soviet Union. His predecessor was Nursultan Nazarbayev, a former metallurgist at the Temirtau complex, who was elected multiple times with approximately 98 percent of the vote.)

But local residents have continued to protest – notably a group of retired miners who were injured while working at the complex. They met on September 19 and drafted a letter of complaint about the company.

It remains to be seen if ArcelorMittal will really change after the November elections. “It always gets away with it,” Gusev, the Temirtau journalist, was quoted as saying on Eurasia.net, in October 2018. “[It is] an influential company that freely violates environmental, labor and criminal legislation.”