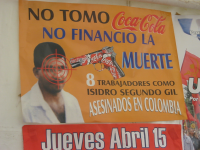 In a March 31, 2003 ruling, U.S. District Court Judge Jose E. Martinez ruled that cases brought by Colombian Plaintiffs under the Alien Tort Claims Act ("ATCA") for human rights violations committed by paramilitaries on behalf of Coca-Cola bottlers Panamerican Beverages, Inc. ("Panamco") and Bebidas y Alimentos ("Bebidas") in Colombia can go forward. Significantly, the court held that the allegations were sufficient to allow the case to proceed on a theory that the paramilitaries were acting in a symbiotic relationship with the Colombian government.

This satisfies a technical requirement of the ATCA that there was a component of "state action" in the acts of violence against the Plaintiffs, which allows the international law claims to proceed against the private actors Panamco and Bebidas.

The court also held that Plaintiffs' claims under the Torture Victims Protection Act (TVPA) could proceed. The corporate defendants had argued that the TVPA's coverage is limited to "individuals," and that this excluded corporations from liability.

In rejecting that position, the court held that "the legislative history does not reveal an intent to exempt private corporations from liability...and that the term 'individual' is consistently viewed in the law as including corporations..."

Dan Kovalik, Assistant General Counsel for the United Steelworkers Union and co-counsel for the Plaintiffs, stated that "it was simply outrageous for the corporate defendants to argue that corporations were immune from the law. In today's global economy, it is essential to hold corporations accountable to the rule of law, and this clarification of the TVPA is essential to that objective."

In these cases, there are four separate actions filed by different sets of Plaintiffs. In all of the cases, SINALTRAINAL, the union of food and bottling workers in Colombia, is a Plaintiff, and alleges injuries due to a campaign of violence directed at the union by paramilitaries employed by the Coca-Cola bottlers.

Javier Correa, the union's President, hailed the decision as "bringing the workers of Colombia one step closer to justice." Other Plaintiffs include the Estate of Isidro Gil, who was murdered inside the Bebidas bottling facility in Carepa by paramilitaries brought in by the plant management. Other claims include kidnapping and torture of union leaders by paramilitaries working on behalf of Panamco bottlers.

In allowing the case to go forward against Coca-Cola bottlers Bebidas and Panamco, the court dismissed Coca-Cola Company and Coca-Cola Colombia from the case on the ground that the company's bottling agreement did not explicitly give Coca-Cola control over labor relations issues of its Colombian bottlers. Terry Collingsworth, Executive Director of the International Labor Rights Fund and co-counsel for the Plaintiffs, indicated that Plaintiffs would appeal that portion of the decision.

"It is entirely premature to hold, as a matter of law, that Coca-Cola does not, in fact, have control over all aspects of the preparation of Coca-Cola products in Colombia, including labor relations," he said.

Collingsworth added that the court considered evidence submitted by Coca-Cola on the motion to dismiss, but did not permit discovery by the Plaintiffs of Coca-Cola's actual participation in the Colombia operations. "It was premature on a motion to dismiss for the court to weigh evidence and resolve facts, and this will be the primary basis for our appeal of this aspect of the decision," Collingsworth explained.

"We are absolutely convinced as a factual matter that one word from Coca-Cola would stop the campaign of terror against trade union leaders in the Coca-Cola bottling plants in Colombia. We are entitled to gather evidence on this point and prove it at trial," he added.

Finally, Collingsworth said that "it should bring small comfort to Coca-Cola that the court has ruled that, while the company is not technically in legal control of labor relations at the Colombian bottling plants, there are sufficient allegations that the company's two bottlers in Colombia, Panamco, which is partly owned by Coca-Cola and is designated a one of Coca-Cola's "anchor bottlers," and Bebidas have indeed engaged paramilitary groups to terrorize union leaders. The question still is, why is Coca-Cola allowing this to happen, and how many other acts of murder and torture are required, to get Coca-Cola to intervene?

In a similar situation in Guatemala in the early 1980's, Coca-Cola was forced by a consumer campaign to terminate its bottling agreement with a Guatemalan bottler who had used right wing death squads to murder union leaders at that facility. Pointing to this situation, Dan Kovalik noted that "wholly apart from legal liability, Coca-Cola remains the sole entity that can change the practices of its bottlers."

Terry Collingsworth called upon all of the human rights and student groups and others that are protesting Coca-Cola's policies in Colombia to redouble their efforts. "Coca-Cola apparently will only respond to pressure from consumers. As we saw in the Guatemala situation, the company will never do the right thing unless it is forced to by consumers."

The ILRF has also asked Attorney General John Ashcroft to prosecute Panamco and Bebidas under 18 U.S.C. 2339B, which makes it a crime to provide material support to terrorists. The paramilitary groups working with Panamco and Bebidas have been designated terrorist organizations by the U.S. State Department.