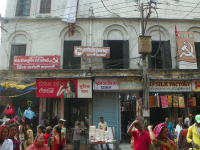 Coca-Cola, the world's largest beverage producer, has been ordered to shut down its bottling plant in Varanasi, India following local complaints that the company was drawing excessive amounts of groundwater. After an investigation, government authorities ruled that the company had violated its operating license.

Activists hailed the victory. "We knew it was a matter of time before the government acknowledged the demands of the community. This is a great victory and a welcome confirmation that local communities can successfully take on big, powerful businesses," Nandlal Master, an activist from Lok Samiti, told the India Resource Center, an activist group.* "We are looking forward to reclaiming the community-owned land that belongs rightfully to the people. We will not rest until Coca-Cola is evicted."

This is not the first time that the company has been in trouble in India for unsustainable water extraction practices. In 2004 a bottling plant in Plachimada, Kerala, was closed for excessive water consumption. Later Kerala passed legislation that allows Coca-Cola to be sued for as much as $47 million in damages as result of the operations. And last year, community organizers in Charba, Uttarakhand, defeated Coca-Cola's plans to build a new factory as soon as the proposal went public.

Indian activists have long complained that Coca-Cola's water extraction policies - the company uses three liters of water to make one liter of Coke - are burdening an already water-scarce country. Such excessive water extraction directly threatens farmers - 70 percent of India's population - who rely on water as a key component for their agricultural output.

The Mehdiganj plant, located in the northeast state of Uttar Pradesh, has been one such source of anger for the community near Varanasi ever since Coca-Cola began operations in 1999. Numerous protests and letter writing campaigns petitioned the state government to reject Coca-Cola's application to expand water extraction on grounds that current operations have already adversely impacted farmers. Local villagers also claimed that the Mehdiganj plant was built illegally on village council land.

Letters sent by 15 village council heads to the local government in 2010, for example, blamed Coca-Cola for exacerbating an already precarious drought-stricken area to limited drinking water and farming.

"There is a grave injustice taking place here as villages and farmers are left without water while Coca-Cola continues to mine groundwater, and that too for profit," Mukesh Sharma, a village head from Nagepur Panchayat, told India Resource Center.

This led to a 2013 report released by the Central Ground Water Authority (CGWA) which stated that Coca-Cola's bottling plant had worsened local water quality from "safe" to "critical" in the intervening 13 years.

In 2003 and then again in 2012 the Uttar Pradesh Pollution Control Board (UPPCB) began an investigation into Coca-Cola's practices.

The UPPCB found that Coca-Cola had not obtained the proper clearance to extract groundwater from the CGWA, noting that the company had almost doubled production capacity from 20,000 cases per day to 36,000 without the Board's permission and misled authorities about waste discharge quantities.

Coca-Cola rejected the decision and announced that it would appeal the case to National Green Tribunal - India's highest environmental court. "We use water very responsibly and judiciously," the company said in an official statement. "We recognize that water is critical to our business as integral to community needs and therefore we have a shared interest in the sustainability of water resources."

But Coca-Cola is facing a major public relations backlash - the dearth of water for farmers has struck a chord in India where millions have been forced to migrate to cities when their crops fail year after year. "The problem is that so many people are dependent on groundwater for farming. It is critical to their day-to-day life. People get very emotional about it," David Molden, campaigner at International Water Management Institute in Sri Lanka told the Ecologist magazine.

Of course, Coca-Cola is by no means the only cause of water depletion in rural areas. A lack of strict water regulation in India, for example, does not favor the farmers. Vested interests are able to take advantage and build pipelines and pumps across villages to extract more and more power with no limits.

"There's no regulatory structure of political will to enforce regulation. Water is poorly managed all over the world but especially in India," Patrick McCully, campaigner at International Rivers told the Ecologist.

In addition to groundwater depletion, soft drink manufacturers in India have also been accused of using contaminated water for their products. A 2003 report, conducted by the Center for Science and Environment (CSE), found that Coca-Cola was one of a dozen beverages that contained over 30 times the level of pesticides considered safe under European Union standards. The CSE report found pesticides like chlorpyrifos DDT, lindane, malathion in Coke drinks. A Parliamentary Joint Committee confirmed the findings in 2004.

"CSE found high levels of toxic pesticides and insecticides, high enough to cause cancer, damage to the nervous and reproductive systems, birth defects and severe disruption of the immune system," read a press release by CSE.  "Market leaders Coca-Cola and Pepsi had almost similar concentrations of pesticide residues."