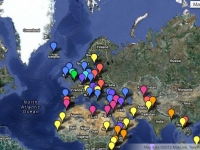 Khaled al-Masri, a German citizen, was kidnapped January 2004 in Macedonia, then tortured and interrogated by U.S. authorities for alleged links to terrorism. When the Central Intelligence Agency (CIA) realized they had the wrong man they put al-Masri on a plane - a Gulfstream jet with the tail number N982RK - to be dumped on a remote Albanian roadside.

N982RK was hired from its owners for this purpose by Computer Sciences Corporation (CSC) of California, according to information obtained recently by Reprieve, a UK charity, and Access Info Europe, another NGO from Spain. Two other CSC contracted jets are believed to have transported prisoners from secret prison sites in Morocco and Romania to Lithuania, according to the documents that were obtained via freedom of information requests.

Details on these flights are to be released as part of a huge cache of documents on 6,500 "rendition" flights carried out on 140 aircraft that transported over 1,100 victims on behalf of the CIA and the U.S. government to and from prison sites around the world. They will be made available on the Rendition Project - a new website - set up by the two organizations working in collaboration with Kent University and Kingston University in the UK.

"By bringing all the data together into one place, we are better able to understand how this system emerged after 9/11, and how it has evolved since," says Dr Sam Raphael of Kingston University. "We hope this will be of benefit to all those wanting to understand how the US and its allies subverted fundamental human rights and international law in their 'war on terror', and to people seeking the accountability of those involved."

Reprieve plans to go beyond simply publishing the documents - the organization has written to investors in these companies to ask them to explain their role in the torture flights.

Aviva, the UK's biggest insurance company, which has a stake in CSC has responded. "Aviva is of course concerned by the allegations made against CSC," a spokesman for the company told the Guardian newspaper. "It is not yet clear that CSC is directly complicit in the activities outlined and we have written to the company seeking clarification. We will investigate these allegations further and take action as appropriate."

Lloyds bank - which has $13.6 million in company shares - has responded in the same fashion. "Our policy is clear, we will not support companies whose ongoing business activities are illegal in the UK and breach the requirements of international conventions as ratified by the UK government," a spokesman said in a statement released to the Guardian.

"The Rendition Project will be an important tool in bringing the tangled web of the CIA's illegal rendition programme to light," said Clare Algar, Reprieve's executive director. "It is essential that we get to the bottom of what was one of the worst human rights abuses of the 'War on Terror' - including the involvement of the UK, a number of other European states, and major corporations."