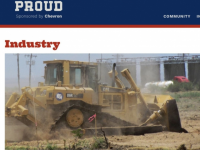 For example, headlines of recent ‘news’ articles on the site include: “New solar energy field in Permian Basin to lower Chevron’s carbon intensity” , “Independent analysis gives Chevron highest environmental rating in Permian Basin” and “Houston Chronicle: Permian Basin economy could thrive for years to come as oil industry modernizes.” In other words, the Permian Proud site reports that Chevron is environmentally friendly and is strengthening the local economy by modernizing industry.

Headquartered in California, Chevron is the second largest fossil fuel company in the U.S. and #16 on the Fortune 500, raking in an astonishing US$15.7 billion in profits from $162.5 billion in revenue in 2021. In recent years, as Chevron production in the Permian Basin has risen to over 700,000 barrels of oil a day, the company has relocated a large number of employees to Houston, Texas, projecting that the region will become a major center for company profits.

Launched in August 2022, Permian Proud is open about its relationship with the company. A Chevron advertisement is paraded on the homepage and “sponsored by Chevron” is part of the Permian Basin’s logo. And a Chevron spokesperson told Gizmodo, a science and technology news website, that Permian Proud is “aimed at providing regional communities with information that is important to them, specifically focused on highlighting the good work so many people are doing and showcasing why the Permian communities are a great place to live and work”.

Yet, at the same time, local communities in the Permian Basin have started to point fingers at Chevron for ground water pollution. Ashley Watt, who lives near the city of Odessa in west Texas, for instance, accused the company of polluting an abandoned well that began spewing toxic, salty water on to her land. “Had she been notified that Chevron was overinjecting salt water under the ranch, perhaps my mother would have known to have tested our water wells more often, and would still be alive today,” Watt wrote in a letter to the Railroad Commission of Texas in December 2021. She has demanded that the commission conduct an independent investigation into Chevron’s abandoned well, which she blames for giving her mother cancer.

The allegation sounds very familiar to anyone who has tracked the company. For example the company has been blamed for massive oil spills in Brazil, the dumping of toxic waste on the lands of Indigenous communities of the Amazon rainforest in Ecuador and major air pollution in the city of Richmond, California.

Media activists says that the creation of Permian Proud is particularly problematic because a third of the newspapers in the region have gone out of business over the past two decades. “People turn to whatever news source is in front of them,” Maddie Kriger, a consultant for communications group Climate Power, told Gizmodo. “For a site like this, it seems like Chevron wanted a site where disinformation could be dressed up.”

A recent study published by the University of North Carolina at Chapel Hill­­ Center for Media Law and Policy suggests that news vacuums lead to a rise in misinformation, as people search out alternative sources for information that may be less trustworthy. “Social media flattens everything. A New York Times story can look exactly like a fake Chevron news site story on a platform like Facebook,” Kriger told Gizmodo. “There’s fewer signals for legitimacy, even if people were looking for them.”

Indeed, this is not the first time that Chevron has created a news site to push a pro-industry view. In 2014, Chevron launched the Richmond Standard, a newspaper in the San Francisco Bay area in California, that was very similar to Permian Proud.

For example, a Richmond Standard article in May of this year was headlined: “Revisiting Steven Donziger’s fraud against Chevron in Ecuador.” The body of the article, which has no author byline, accused Donziger, a human rights lawyer in New York, who sued Chevron on behalf of Indigenous communities in Ecuador, of being an “adjudicated racketeer, convicted of criminal contempt.”

The article links to the Amazon Post, another Chevron-backed news site, claiming to represent “Chevron's Views and Opinions on the Ecuador Lawsuit” as well as to Chevron’s own web materials on the matter.

Another 2019 article, written by Michael Aldax, in the Richmond Standard is headlined: “Filipino culture celebrated at Richmond Refinery.” “It is one of several employee-run networks encouraged by Chevron to promote diversity and inclusivity in its workforce,” he writes. Aldax is not apologetic about the site’s relationship with Chevron. “We came out in the beginning and said, if you’re looking for a story that’s critical of Chevron, you’re not going to find it in the Richmond Standard,” he told the Los Angeles Times newspaper.

Likewise, Melissa Ritchie, Chevron’s former spokeswoman, is not shy about the company’s role at the Richmond Standard. The website is “a great resource for Richmond ...(that delivers) amazing stories about the positive things that are happening here,” Ritchie told the Times.

Not surprisingly, stories like a ten weeklong refinery worker strike at Chevron Richmond, after the company left them without a contract for weeks, did not make the Richmond Standard’s headlines.

Meanwhile Aldax, who also happens to be one of the Permian Proud’s key writers, appears to be a pioneer in exploiting news vacuums to launch propaganda sites. He runs two media companies: Locality Labs and Metric Media, which have together opened hundreds of “news” sites since 2019. Masquerading as local news outlets, these sites are actually funded by conservative groups, often tied to the Republican party, that publish popular conspiracy theories and misinformation. For example, just before the election for governor of Virginia in 2021, 28 websites run by Metric Media published almost 5,000 articles about critical race theory in schools, a common right-wing conspiracy theory used to attack Democrats during elections.

“We have increasing numbers of dollars going into public relations of that sort,” Ken Doctor, a media analyst at Newsonomics.com, told the Times, explaining how companies create local news sites to publish their press releases. “Today, everybody can be a publisher. The fact that this Richmond site looks like any other community news site is just a masquerade.”