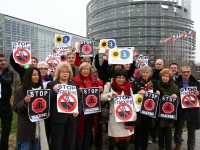 Fracking for oil and gas across Europe has suffered a series of setbacks with Chevron closing its offices in Sofia, Bulgaria, and Shell postponing fracking plans in the Ukraine by at least two years. Meanwhile the French government is standing firm in its opposition to fracking.

Fracking - which is short for hydraulic fracturing - is not entirely new. Since the 1940s engineers have attempted to drill the deep underground reserves of gas and oil reserves. Advances in technology during the 1980s led to new horizontal hydraulic drilling techniques, which involves boring a mile deep into the earth and then pumping in millions of gallons of water, sand and hazardous chemicals to fracture rock and extract gas contained inside.

Shell announced that it would take a respite from drilling for gas in the 8,000-square-kilometer Yuzivska field in the eastern Ukraine in early June. The company was awarded the concessions by the government of Viktor Yanukovych in January 2013, a year before he was ousted from office by violent protests this past February.

Since then, clashes between government forces and pro-Russian militias have caused Shell to reconsider, not least because Shell has other lucrative energy deals in Russia.

"We obviously need to assess the future security situation as it develops because the safety of our own people is our first priority," Simon Henry, Shell's chief financial officer, told Bloomberg TV. "Russia is a major holder of hydrocarbon reserves, possibly the largest in the world. So in the long term it really does matter."

Chevron, which was awarded a permit to drill for shale gas in the 4,000 square-kilometer Novi Pazar field in north eastern Bulgaria in June 2011, has faced an uphill political battle. Just six months after the initial contract was signed, a moratorium on fracking was declared in Bulgaria in January 2012.

A little over two years later, this past May, Chevron announced that it would close down its Sofia offices. "The uncertainty over Chevron's ability to explore for natural gas from shale in Bulgaria means the opportunity is no longer competitive with other opportunities in our global portfolio," the company told the Financial Times Chevron continues to explore and evaluate investment opportunities in Central and Eastern Europe."

That's not the only place that Chevron has pulled out of in recent months. Last October the company pulled out of Lithuania citing regulatory uncertainty, just a month after being awarded a 1,800 square kilometer concession in Silute-Taurage.

While the oil companies blame politicians of canceling their projects, new studies are emerging that suggest that many of the shale gas estimates are overblown: Shell's initial explorations in Kharkiv, Ukraine, came up dry and Lithuanian studies were questioned. Exxon Mobil, Talisman, and Marathon pulled out of Poland last year after 40 wells yielded little.

Europe is not the only place where fracking estimates seem to have been wildly optimistic. Last month, U.S. government officials slashed their estimates of shale gas in the Monterey field in northern California by a staggering 96 percent.

Meanwhile France - the other European nation to have a ban on fracking - is also standing firm. Last October, Schuepbach Energy LLC, a Texas company, lost a lawsuit to overturn the 2011 policy. "It's a judicial victory but also an environmental and political victory," French Environment Minister Philippe Martin told reporters after the court issued its decision. "With this decision the ban on hydraulic fracturing is absolute."