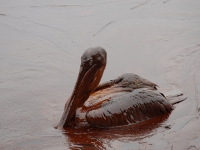 British Petroleum (BP) has been sued by some 25,000 Mexican fishing businesses over the 2010 Deepwater Horizon disaster in the Gulf of Mexico. The company says it has paid $1.8 billion in compensation to U.S. businesses but has yet to offer money to those affected south of the border.

Deepwater Horizon was a floating rig built by Hyundai Heavy Industries of South Korea and leased by Transocean of Louisiana to BP to explore for oil 4,000 feet below the surface in the Macondo Prospect some 41 miles off the coast. On April 20, 2010, methane gas from the well forced its way to the surface and caused the well to blow out. The resulting fire killed eleven workers and burned for three months before it was capped, but not before an estimated 4.9 million barrels of oil were spilled.

"To say that damages only occurred in the United States is a lie and shows a lack of respect for Mexico," Horacio Polanco, the lawyer for the plaintiffs in three Mexican coastal states of Tamaulipas, Veracruz and Quintana Roo, told El Pais newspaper. "There are at least 30 types of migratory species that we share with the United States, and the damage has been enormous."

Polanco's lawsuit was filed just days before U.S. courts threw out a lawsuit against BP filed by Mexican state governments, stating that the individual states did not have standing in court.

"The Mexican constitution vests ownership of 'lands and waters within the boundaries of national land territory' in the 'nation,'" wrote Chief Judge Carl Stewart of the U.S. Court of Appeals in a judgment handed down May 1. "The state constitutions ... bespeak a role for the states in managing some of the country's property. But they do not provide the Mexican states with the crucial proprietary interest."

The courts will now have to decide if individual Mexican businesses can sue BP. And the courts are also expected to hear a lawsuit filed in April 2013 by the Mexican federal government for compensation from BP.

To date, BP has set aside $43 billion to cover costs related to the spill - which include direct clean up costs, compensation to private businesses and fines to government authorities.

Earlier this year Judge Carl Barbier ruled that the company should also pay the U.S. government a fine of $13.7 billion for violations of the U.S. Clean Water Act.

Previously, the company had agreed to pay out $7.8 billion to compensate most private sector claimants in the U.S. under a settlement agreement signed in March 2012. That figure has risen steadily and the company says it now expects to pay out as much as $9.7 billion.

In addition, if Polanco wins, he says that his Mexican clients should be paid as much as $50,000 each or another $1.25 billion.

Meanwhile, the U.S. business owners are complaining that they have yet to be paid over three years after they settled with BP. Brent Coon, a Texas lawyer whose firm represents 10,000 spill clients, told the Nation magazine that he expects that some 75 percent of small-business owners-"the Gulf Coast blue-collar, hand-to-mouth, paycheck-to-paycheck guys"-may never be paid.

BP is hardly short of money to make payments to either the U.S. or Mexican fishing businesses. The company reported $12.1 billion in profits in 2014 and $13.4 billion in 2013. BP owned approximately $315 billion in assets around the world in 2014, up from $236 billion in 2009, the year before the spill, according to estimates provided in court.

Separately, in January 2013 Transocean agreed to pay out $1.4 billion to settle all U.S. government claims against it. And last September, Halliburton, which was also a defendant in the lawsuits, settled all claims with the U.S. government for a payment of $1.1 billion.