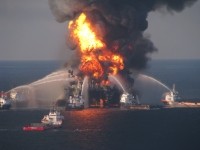 BP, the UK oil company, went on trial this week for the 2010 Deepwater Horizon drilling rig explosion in the Gulf of Mexico. The company could be fined up to $30 billion over the $25 billion it has promised if the court finds that it was "grossly negligent."

"The evidence will show that BP put profits before people, profits before safety and profits before the environment," Mike Underhill, a lawyer for the U.S. Justice Department, said in his opening statements before the court. "Despite BP's attempts to shift the blame to other parties, by far the primary fault for this disaster belongs to BP."

Deepwater Horizon was a floating rig built by Hyundai Heavy Industries of South Korea and leased by Transocean of Louisiana to BP to explore for oil 4,000 feet below the surface in the Macondo Prospect some 41 miles off the Gulf coast. On April 20 methane gas from the well forced its way to the surface and caused the well to blow out. The resulting fire killed eleven workers and burned for three months before it was capped but not before an estimated 4.9 million barrels of oil were spilled, some 20 times greater than the Exxon Valdez spill in 1989.

The trial, which is being held in New Orleans, has three phases that are expected to last till the end of the year. The first phase is being heard by U.S. District Judge Carl Barbier and has focused so far on the fact that the company slashed spending in the months before the spill.

Kevin Lacy, former senior vice president for BP's drilling operations in the Gulf, told the court that the company cut between $250 million and $300 million from its drilling budget between 2008 to 2009 while it ramped up production more than 50 percent.

Mark Bly, BP's executive vice president for safety and operational risk, who was in charge of the internal investigation of the spill, defended the cuts noting that the project was $60 million over budget. "I was never given a directive to cut corners or deliver something unsafe, but there was tremendous pressure to cut costs," he told the court.

Tony Hayward, former CEO of BP, also testified via videotape to say that he did not believe that cost-cutting measures prior to the spill adversely impacted operations.

But Robert Bea, a University of California-Berkeley engineering professor, testified to the court that BP failed to implement a two year-old safety management program on the Deepwater Horizon before the explosion. Bea, who worked as a safety consultant for BP, said that he had sent many warnings to company management. "You still don't get it," he says he told BP officials in 2007. "Process safety is deadly serious, and you've turned it into a traveling roadshow."

"Financially, BP had the resources to effectively put into place a process safety system that could have prevented the Macondo disaster," Bea told the court. "It was too lean."

Experts believe that the company will eventually settle out of court. "At some point, they'll try to stem the public image hemorrhaging they're suffering right now," Blaine LeCesne, an associate professor at Loyola University New Orleans College of Law told USA Today.

BP was rumored to be close to a $16 billion out of court settlement with the U.S. government last week but the talks failed to yield an agreement so far.

Some have noted the irony of the Obama administration blaming BP. "Well before the disaster, Obama was making encouraging noises to the oil industry about permits for exploratory wells in new areas of the Gulf," writes Dominic Rushe in the Guardian. "When things went wrong, Obama turned on BP. After the full scale of the disaster became apparent, Obama passed the buck in a style almost as slick as the spill."

The Center for Biological Diversity, Defenders of Wildlife, Southern Environmental Law Center, the Natural Resources Defense Council and Oceana sued the Obama administration last July for issuing new permits to drill in the Gulf of Mexico. "Failing to fully analyze the effects of the Deepwater Horizon oil disaster and the potential of future spills before moving forward with drilling in the Gulf of Mexico is asking for another drilling catastrophe," said Sierra Weaver, senior staff attorney for Defenders of Wildlife.