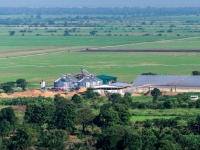 A flagship rice plantation in Tanzania run by UK investors has allegedly destroyed the livelihoods of local smallholder farmers, driven them into debt and impacted the local environment, according to a new report published by the Oakland Institute. The report was co-authored with Greenpeace Africa and Global Justice Now.

In 2008, Agrica, a UK company run out of the island of Guernsey, acquired the 5,818 hectare Mngeta farm in Kilombero, one of Tanzania’s most fertile agricultural regions. Agrica set up a company called Kilombero Plantations Limited (KPL) and cleared the land to grow rice using a mechanized method of farming developed in Madagascar. In addition KPL started to supply local smallholder farmers with training, seeds and supplies to engage in intensive rice cultivation.

In the last seven years, KPL has become the largest single rice producer in East Africa. KPL markets its own “Mama Mchele” (Mrs. Rice) brand of rice from Mgneta and 5,000 smallholder farmers working on contract.

The project is regularly touted as an example of the Kilimo Kwanza (Agriculture First) initiative, launched by President Jakaya Kikwete. (Some 75 percent of the country’s 45 million citizens are farmers)

"For 50 years aid agencies have been trying to lift the smallholder from subsistence to surplus - and they've failed," Carter Coleman, CEO of Agrica, told the BBC. “We're the sort of showcase project,” he added to the UK-based Centre for Investigative Journalism.

"Before, life was so tough - but after joining the group and being trained this started to improve my life," Betrida Kiganga told the BBC. She says that she is able to support herself and her five children with the income from the company. "Now we're harvesting more. We were only getting ten sacks, now we're getting up to twenty in the same plot," she added.

With such glowing results, international investors such as the Capricorn Investment Group and Norfund, the Norwegian government-owned investment company have been happy to put money into the project. In 2013, Justine Greening, the UK Secretary of State for International Development, announced a £6.7 million ($10.7 million) loan to the company to help finance a rice husk gasification plant to support KPL and the contract smallholders.

But complaints soon started to surface in the community, making development aid watchers suspicious. “When the Oakland Institute researchers initiated the work, they did expect to come across positive stories bearing in mind how the company had been portrayed internationally,” writes Mikael Bergius, a fellow at the Oakland Institute in California. “It was therefore surprising to experience the strong sense of negativity among respondents, and in the villages in general, towards KPL.”

“Irresponsible Investment” – the Oakland Institute’s new report – estimates that as much as a quarter of the 5,800-hectare farm was essentially taken from some 230 households who live in the surrounding villages of Lukolongo, Mngeta and Mkangawalo. The activists interviewed 40 community members who say that they were given just three acres of substitute land in exchange plus a maximum supplement of just 30,000 Tanzanian shillings ($17) for anyone who claimed to have farmed more than three acres. By comparison, the costs of renting land in the area is 100,000 Tanzanian shillings ($55) a year per acre.

Coleman disagrees with the conclusions of the report, saying that KPL had compensated local farmers in a fair manner.

“Claims of land ownership beyond 3 acres were difficult to substantiate if they were not under cultivation and had no paper trail. Anyone could point at an area of bush and call it his own,” Coleman wrote in a reply to the Oakland Institute. “Perhaps these families may have been fraudulently allocated more than 3 acres of land by the village government which had no authority to allocate land; or perhaps they purchased an area from someone who had no right to sell the land.”

Coleman also noted that that KPL built a total of 82 concrete houses with raised floors and tin roofs and separate outhouse for the displaced households. All told, he claims that Agrica spends almost $700,000 a year in the community in salaries and subsidized health care.

But the activists say that this is not good enough. “Building school rooms and a health centre are positive of course,” wrote Anuradha Mittal, executive director of Oakland Institute, in a response to Coleman. “But true development is about ensuring communities and future generations have the means to live a life with dignity in a healthy environment. By taking away land and undermining the livelihoods of local farmers, the Agrica project jeopardizes the ability of local communities to enjoy sustainable development.”

In particular the new report alleges that Agrica foisted an expensive and unsustainable agricultural model on the local farmers.

One interviewee, who asked to remain anonymous, told the Oakland Institute: “Life now is very bad as compared to before. Previously I was able to earn money from my own farm, but now I have to earn money by doing various small jobs for cash. Before, I was able to cultivate my own food. Now I need to buy the food with the small income I have.”

Yet other local farmers complained that KPL was using chemicals that were polluting neighboring farms: “The chemicals from KPL drifted into my farm and destroyed my maize,” another Oakland Institute interviewee said. “That season I was not able to harvest anything because the whole farm was destroyed… our household economy was negatively affected and it also led to a shortage of food in the household that year.”

Coleman says that the company is not to blame for this but Greenpeace Africa says that such examples prove that Agrica’s very development model is flawed.

“In an area known as Tanzania’s food basket due to its fertile soil, this uncovers the real agenda of Agrica,” Glen Tyler, agriculture campaigner for Greenpeace Africa, said in a press release. “They have opened up new markets for the products of international agribusiness that are damaging for both people and the environment.”